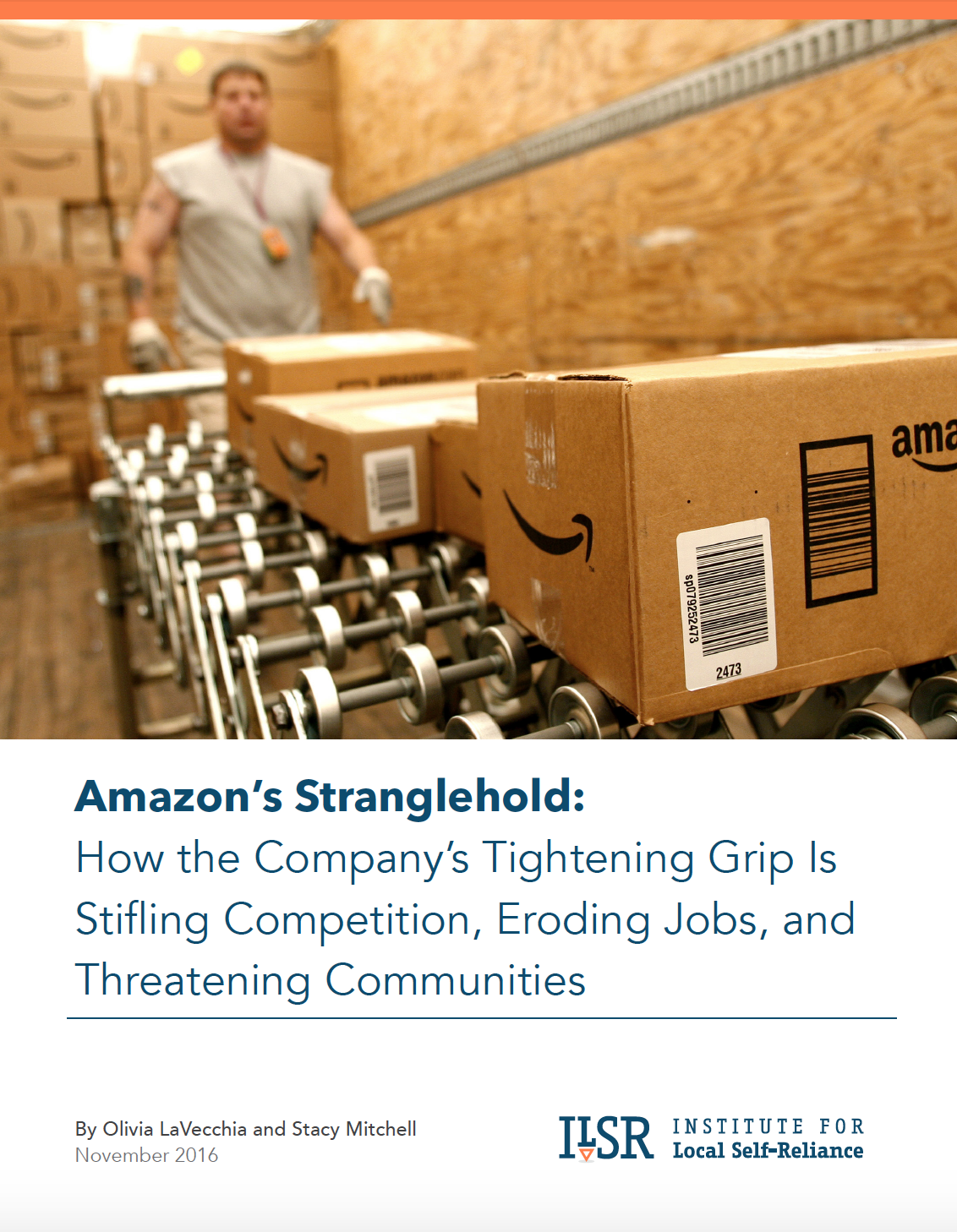 For all of its reach, Amazon, the company founded by Jeff Bezos in 1995 as an online bookstore, is still remarkably invisible. It makes it easy not to notice how powerful and wide-ranging it has become. But behind the packages on the doorstep and the inviting interface, Amazon has quietly positioned itself at the center of a growing share of our daily activities and transactions, extending its tentacles across our economy, and with it, our lives.

Today, half of all U.S. households are subscribed to the membership program Amazon Prime, half of all online shopping searches start directly on Amazon, and Amazon captures nearly one in every two dollars that Americans spend online. Amazon sells more books, toys, and by next year, apparel and consumer electronics than any retailer online or off, and is investing heavily in its grocery business. Its market power now rivals or exceeds that of Walmart, and it stands only to grow: Within five years, one-fifth of the U.S.'s $3.6 trillion retail market will have shifted online, and Amazon is on track to capture two-thirds of that share.

But describing Amazon's reach in the retail sector describes only one of the company's tentacles. Amazon is far more than a big, aggressive retailer. As ILSR shows in this report, Amazon increasingly controls the underlying infrastructure of the economy. Its Marketplace for third-party sellers has become the dominant platform for digital commerce. Its Amazon Web Services division provides the cloud computing backbone for much of the country, powering everyone from Netflix to the CIA. Its distribution network includes warehouses and delivery stations in nearly every major U.S. city, and it's rapidly moving into shipping and package delivery for both itself and others. By controlling this critical infrastructure, Amazon both competes with other companies and sets the terms by which these same rivals can reach the market. Locally owned retailers and independent manufacturers have been among the hardest hit.

Amazon's bet is that as long as consumers are enjoying one-click ordering and same-day delivery, we won't pay much attention to the company's creeping grip. Even as consumers, Amazon's dominance comes with significant consequences. The company uses its data on what we browse and buy to shape what we see and adjust prices accordingly, and its control over suppliers and power as a producer itself means that it's increasingly steering our choices, deciding what products make it to market and what products we're exposed to.

But we're also much more than consumers. We're people who need to earn a living, who want to have meaningful jobs, who care about the freedom to build a business. We're neighbors and we're citizens, entrepreneurs and producers, taxpayers and residents, with needs and wants from an economy that go beyond the one-click checkout.

Amazon's increasing dominance comes with high costs. It's eroding opportunity and fueling inequality, and it's concentrating power in ways that endanger competition, community life, and democracy. And yet these consequences have gone largely unnoticed thanks to Amazon's remarkable invisibility and the way its tentacles have quietly extended their reach.

ILSR's report, "Amazon's Stranglehold: How the Company's Tightening Grip is Stifling Competition, Eroding Jobs, and Threatening Communities," aims to pull back this cloak of invisibility. It presents new data; draws on interviews with dozens of manufacturers, retailers, labor organizers, and others; and synthesizes a broad body of previous reporting and scholarship.

It's organized into four main sections:

In the first section, "Monopolizing the Economy," ILSR looks at how Amazon is using its market power to eliminate competition and take control of one industry after another, leaving us with an economy that is less diverse and innovative, and which affords fewer opportunities for businesses to start and grow.

In the second section, "Undermining Jobs and Wages," ILSR examines Amazon's labor model and find that work inside its 190 distribution facilities resembles labor's distant past more than a promising future, with many workers performing grueling and under-paid jobs, getting trapped in precarious temporary positions, or doing on-demand assignments that are paid by the piece.

In the third section, "Weakening Communities," ILSR explores how Amazon is upending the longstanding relationship between commerce and place, changing the way that our communities feel and threatening the revenue streams and social capital that they depend on to function.

In the final section, "The Policy Response to Amazon," ILSR begins by looking at how Amazon's rise has been heavily assisted by government support, including subsidies and tax advantages worth billions of dollars.

And finally, ILSR turns to what to do about it, sketching the steps policymakers should take to check the company's power and bring about a more competitive and equitable economy.