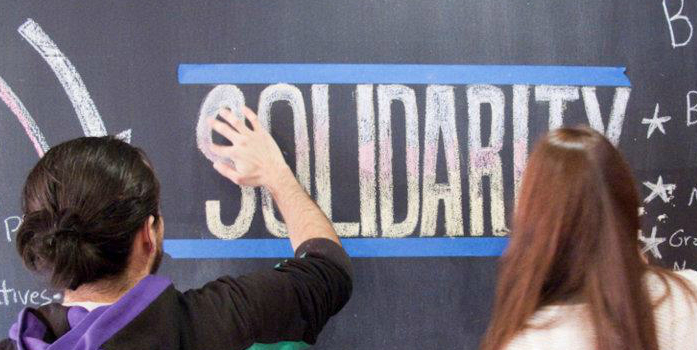 This is a potent moment, but to take full advantage of it we must embrace new ways of organizing and relating to each other.

A. There are several important components to regional infrastructure:

B. Alone this infrastructure is just a social skeleton. It needs awareness, connection, and community. These come through culture. Fritjof Capra describes culture in a lively way: "…culture arises from a complex, highly nonlinear dynamic.  It is created by a social network involving multiple feedback loops through which values, beliefs, and rules of conduct are continually communicated, modified, and sustained.”

We need a movement culture for regional cooperative/solidarity economics that is rooted in a culture of belief, empowerment, and thinking cooperatively. They are inseparable. Absent one, absent all.

A culture of belief: enough people in the same locale becoming convinced that it’s possible for cooperative/solidarity economics to become a big force right where they live. This means a critical mass of people…

Second, such a movement must have a culture of empowerment. This requires that enough ordinary people in a given region want to shift from living out of fear and scarcity to a mentality of abundance and mutuality. Want to move from being trapped in an individualism that pits all of us against one another, to believing we can be solid with each other where it counts.

Such shifts are transformative and very challenging. They require special systems of education and support. The systems, in turn, require a different kind of culture than the ones we have grown up in. Cultures of belief in mutuality and the feasibility of ordinary people to make that happen.

Third, this new kind of culture must also be a culture of Thinking Cooperatively. That is, a culture with an unconditional commitment for building transparency and trust, on the one hand; and fostering the attitudes and skills necessary for engaging in the relentless consulting and negotiating necessary for a democratic regional network, on the other.

When individuals in a group can do this, the power of the group can soar. When groups and organizations can come together like this, they can empower a movement overflowing with the belief that something new can happen. It can become contagious.