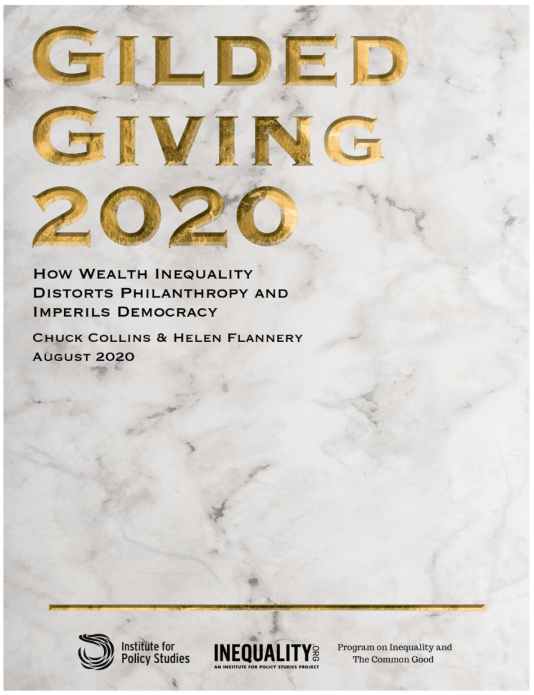 Ten years ago, in August 2010, several dozen U.S. billionaires led by Bill Gates and Warren Buffett pledged to give away at least half of their wealth before their death. Many have donated considerable sums to charities and foundations since then. But as a group, these billionaires have seen their fortunes skyrocket in the decade since the so-called Giving Pledge was launched.

The wealth of the billionaire class is growing so fast, it’s simply outstripped their capacity to give it away. But in a time of acute charitable need, there’s another growing concern in the broader charitable sector: Most of these funds may end up in family foundations and donor-advised funds that could legally exist in perpetuity — without ever supporting real, on-the-ground charitable work.

Over the last two decades, charitable giving has been on a steady upward trajectory. But this growth has masked a troubling trend: Charity is becoming increasingly undemocratic, with organizations relying more on larger donations from a smaller number of wealthy donors, while receiving shrinking amounts of revenue from donors at lower-and middle-income levels.

What’s more, a growing share of these high-end donations go not to the organizations that actually perform charitable work, but to tax-privileged private foundations and donor-advised funds that pay only a small percentage of their assets to support working charities. These vehicles offer substantial tax benefits to donors, but may then hoard most or all of these donations in their endowments, drastically limiting what’s available to on-the-ground nonprofits.

This poses a growing risk to the independence of the nonprofit sector, the integrity of the tax system, and the health of our democracy — and that was before two new existential threats to the nonprofit sector: the GOP tax cut package that passed in 2017, and the COVID-19 pandemic and recession, both of which are likely to concentrate more wealth at the top while hurting the ability of people of ordinary means to give.

Diminished giving threatens to exacerbate philanthropic inequity even further at a time when the demand on charities is increasing. This is not the time to discourage broad philanthropic participation, or to hoard charitable revenue in wealth-preservation vehicles. Gilded Giving 2020 examines several possible implications of these conditions and suggests some solutions.