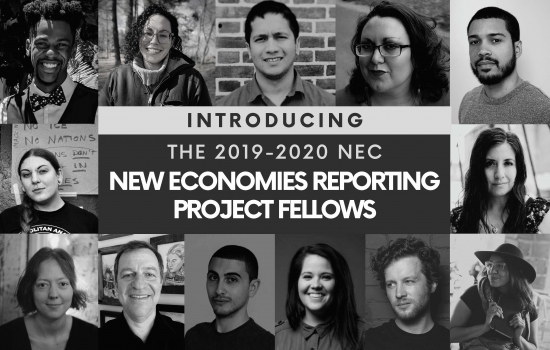 From the Green New Deal to Medicare For All to Universal Basic Income, the latest wave of progressive proposals each aim to solve significant problems through re-envisioning our economy. Even as popular support grows for more radical change, these big ideas for social programs often are defeated in the public arena because of a single, powerful question: how are we going to pay for it?

The goal of the fellowship is to increase the quantity and quality of journalism focused on local, regional and national finance solutions, especially stories that connect these solutions to the need and possibility of systemic change. All fellows will receive travel grants to attend the Eastern Conference for Workplace Democracy, a biennial conference of the US Federation of Worker Cooperatives in Baltimore, October 17 – 20. At the conference, fellows will meet each other and receive a full-day of training on how to report from a solutions-perspective from the Solutions Journalism Network. Meet the fellows:

Amir Khafagy is a New York City-based activist and journalist. Much of his work focuses on the intersection of urban development, local politics, and community through an activists lense. He has contributed to publications such as The Nation, Curbed, Vice, CityLab, Gothamist, City Limits, Dissent, Shelterforce, Jacobin and In These Times.

Brendan O'Connor is a freelance journalist based in New York City. He is working on a book about immigration, capitalism, and the far right for Haymarket Books.

Chad Small is a New York City based freelance reporter who primarily works as the Environmental Reporter for Blavity: Politics. His reporting principally covers the economic, social, and public health effects of Environmental Racism in the United States, and throughout the African diaspora. Chad’s work is interested in using data analytics to reveal novel information that could enhance human-centered reporting.

Darya Marchenkova is a reporter, researcher, and video journalist. She is a fellow at “Fault Lines,” a current affairs and documentary program on Al Jazeera English, and interned at Type Investigations and the Montreal Gazette. Before becoming a journalist, Darya worked in community organizing, communications, and curriculum development.

Eli Day is a Detroiter, where he writes about race, class, politics, and history for publications like Mother Jones and In These Times.

Jaisal Noor has served as a senior producer, host and editor at The Real News Network for the past six years. With his expertise in education policy and systemic inequity, he focuses on Baltimore, Maryland. Before joining TRNN, he contributed print, radio, and TV reports to Free Speech Radio News, Democracy Now! and The Indypendent.

Jen Deerinwater is a citizen of the Cherokee Nation of Oklahoma, bisexual, Two Spirit, multiply-disabled journalist and organizer who covers the issues her communities face with an intersectional lens. She's a contributor at Truthout, Founder and Executive Director of Crushing Colonialism, and a Freedomways Reporting Project fellow. Jen's work is included in the anthologies Two-Spirits Belong Here and Disability Visibility due out in the summer of 2020. She has been interviewed for numerous outlets on her work and The Advocate named Jen a 2019 Champion of Pride.

Kathryn E. Styer is an audio producer and journalist based in Oakland, California. She has published with TalkPoverty, Outside Online and is currently the station co-director of KGPC-LP Oakland, Peralta Community Radio. Her work focuses on equity and the impacts of race, gender and class.

Kim Kelly is a freelance writer and organizer based in Philadelphia. She is currently the labor columnist for Teen Vogue, and a columnist on class and labor at the New Republic. Her writing on politics, class, and culture have appeared in the Guardian, the Baffler, the New York Times, the Washington Post, and many others.

Leah Douglas is a staff writer and associate editor at the Food and Environment Reporting Network, an independent, nonprofit newsroom that publishes investigative and explanatory reporting on food, agriculture, and environmental health. Her reporting on corporate power and big business in the food and agriculture sectors has been published in the Guardian, the Nation, the Washington Post, Mother Jones, Time, Fortune, NPR, and other outlets.

Michelle Jokisch Polo is a reporter & Grand Rapidian transplant from El Salvador & Ecuador. Michelle currently works as the inclusion reporter at WGVU Public Media in Grand Rapids, Mich. She wants to dismantle white supremacy through discourse. She loves to ask questions and will take any to do so.

Timothy Pratt is a bilingual Atlanta, Georgia-based writer/reporter covering subjects ranging from soccer to immigration to election integrity and security. His work has appeared in The New York Times, The Guardian, The Atlantic, the Associated Press and many others.

Valerie Vande Panne is an award-winning freelance reporter and Next City Equitable Cities Fellow. Her work on alternative economies has appeared in Bloomberg, In These Times, and Salon, among many other outlets.

Fellows were chosen from a pool of over 70 applicants and selected through a judging process anchored by journalists Abby Scher of Dollars & Sense, Dharna Noor of The Real News Network, Oscar Perry Abello of Next City as well as Jo Ellen Green Kaiser, previously of The Media Consortium.