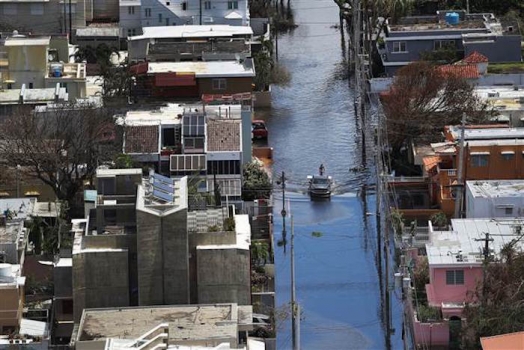 P.S. Stay tuned, NEC will be releasing a resource library next week, an online library filled with tools and readings to help you build a new economy. Plus, there’s still time to share your thoughts on our bi-weekly news round-ups. Help us make them better by taking this 2-minute survey!

***Sign-up here to receive these bi-weekly newsletters straight to your inbox.***

Citizen-Powered Storm Relief: Looking to support the victims of Hurricane Maria? Check out this eco-friendly survival itemized list from Puerto Rican artists in New York selected for Puerto Rico's resilience after the storm as well as the Maria Fund.

NYC’s Co-op Bus Fleet: NYC’s school bus drivers are pressing the city to make school-bus service, partially owned by private corporations, more accountable to both workers and school communities through a union-led cooperative with the potential to partner with the de Blasio administration’s coop development initiative to launch a labor-powered workplace. Read about their work here.

Power to the Plowers: An urban farm in Atlanta produces over 35,000 pounds of food annually on just 4 acres of land and is just one in a new generation of small farmers emerging in US cities. Check out this article on how urban agriculture can put power (and food) back in the hands of everyday people.

Finland’s UBI: Rather than rolling out laws on a massive scale, Finland is trying to craft legislation in stages, with user feedback along the way. See how this has played out with their universal basic income experiment here.

Energy Grid Overhaul: Plans to privatize Puerto Rico’s energy sector have been in the works for years, but recent storms have exacerbated the need to overhaul. Nearly all cell phone towers are still out of commission. As a model for adaptive resiliency, utility providers in Hawaii have outlined a blueprint for moving toward a grid backed solely by green energy. Read more here.

In less than 30 days, more than 90 of the world's largest banks will meet in Brazil to recommit to the Equator Principles, a set of rules guiding which big infrastructure projects they will and won't finance.

"Equator banks" have promised to avoid or minimize the social, environmental and climate impacts of such projects, and to respect the rights and interests of Indigenous communities affected by them. But the same banks have financed projects like the Dakota Access Pipeline and the Honduran Agua Zarca hydro project.

NEC is partnering with a coalition of human rights, environmental and Indigenous-led organizations– add your name here to demand that the Equator Banks act decisively when they meet October 24 in São Paulo, Brazil, and commit to stop financing climate disasters and respect Indigenous peoples’ rights and land.

The current moment represents an escalation in the continued attack on social, economic, and climate justice. In the age of Trump and the rise of the right wing, among many other issues, misogyny is becoming normalized, reproductive rights are being threatened, and hate crimes are increasing. In the face of this context, the Feminist Organizing School will provide a space for grassroots leaders to come together and create a shared vision for the grassroots feminist movement that we hope to build. (Online, October 4)

Attend a special Movement School For Revolutionaries in Jackson, MS on Saturday, October 21st from 9am-5pm, with an optional half-day strategy session on the morning of Sunday, October 22nd. We are excited that we will be hosted by the folks at the Chokwe Lumumba Center for Economic Democracy and Development, which is part of Cooperation Jackson.(Jackson, October 21)

The first platform cooperativism event in 2015 popularized the idea, and the second event in 2016 brought together co-op and union leaders to push the model forward. This third event will zero in on ways that platform cooperatives can help to address some of the world’s most urgent challenges. The fairer digital economy we need is already emerging everywhere around us. (New York, November 10-11)

In addition to issues of local authority, the 3-day conference will address a range of issues such as rural broadband solutions, gigabit connectivity in education and economic development, and serving MDUs. There will also be panelists from electric cooperatives, mobile broadband providers, and consultants sharing information and strategies. (Atlanta, November 7 – 9)