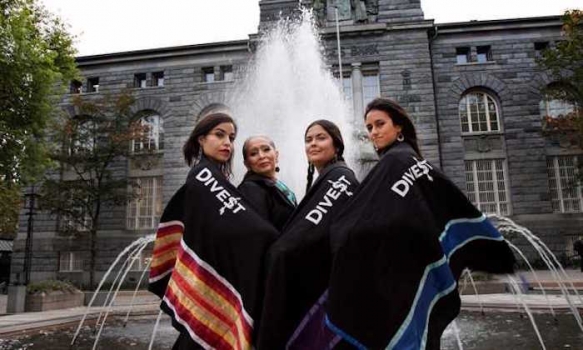 In this week’s roundup, we’re talking about the biggest resident owned community of its type in history, the native women leading #DivestTheGlobe, and grassroots storm relief. Check it out!

#DivestTheGlobe: This week, people led actions across the country (and world) in a coordinated protest of 91 of the biggest banks role in the climate crisis and abuses of Indigenous communities. Read about how Native American women are leading the fight in this interview with Jackie Fielder of Mazaska Talks / Money Talks.

Collective Creation: Check out this short clip from NEC member the Cooperative Food Empowerment Directive (CoFED) of "Through Word of Mouth," a community-based documentary focusing on the histories we bring with us into our collective spaces, how we can plug-in to our neighborhoods and use our relationships with one another to create a system that best works with our needs.

Building a New Power System: What can energy cooperatives do that regular energy companies can’t? Read about how four co-ops are organizing to create a multi-class, multirace clean energy system that addresses socio-economic and environmental justice in Alternet.

New Economy Coalition – in collaboration with The Media Consortium and The Laura Flanders Show – is supporting reporters in telling the story of the New Economy movement; the stories of just transition to a better and stronger social, cultural, and economic system taking place all over the country, but aren’t being talked about. Here is a sample of the reporting our fellows have produced most recently:

Disaster Relief: Communities in Florida have organized aid across the state and to Puerto Rico. For some, the hope is that this form of independent, decentralized disaster relief can also raise people’s consciousness about what they call the disaster of capitalism. Read about the grassroots storm response on Scalawag.

A New Home Ownership: 430 families of a mobile-home park in Halifax, Massachusetts bought out the park where they live and will turn it into a co-op. The deal, the largest resident-owned community (ROC) sale ever, will put residents in charge of the property without having to put up any of their own money. Read about it here and also in WGBH.

All in the Family: In Fresno, California, a prototype of a Food Commons (an NEC member) initiative brings together a network that includes a farm, a community supported agriculture-style subscription service, a wholesale business, and a commissary kitchen available to food truck owners and other food-related entrepreneurs in the city. Read how the model supports local-wealth and democracy.

Jackson Rising is a chronicle of one of the most dynamic, but under-documented experiments in radical social transformation taking place in the United States. The book documents the ongoing organizing and institution building of the political forces concentrated in Jackson, Mississippi dedicated to advancing the “Jackson-Kush Plan.” These forces include the Jackson People’s Assembly, the New Afrikan People’s Organization, the Malcolm X Grassroots Movement, the Jackson Human Rights Institute and NEC member, Cooperation Jackson.

Clean Power Healthy Communities
The Local Clean Energy Alliance (who helped organize the energy democracy track at CommonBound 2016) are hosting the sixth annual Clean Power, Healthy Communities Gathering. Learn what energy democracy is – and how it can empower and accelerate your own work, whether you’re focusing on the environment, social justice, the local economy, labor and the workforce, or housing and displacement. (Oakland, California, November 16 – 17)

The People’s Disruption: Platform Co-ops for Global Challenges
The first platform cooperativism event in 2015 popularized the idea, and the second event in 2016 brought together co-op and union leaders to push the model forward. This third event  will zero in on ways that platform cooperatives can help to address some of the world’s most urgent challenges. The fairer, digital economy we need is already emerging everywhere around us. (New York City, November 10 – 11)

This four-day conference aims to generate visions of a future in which land, wealth and power are equitably distributed. MMMC is a confidential space that uses workshops, storytelling and skill building to create a space for young people with class privilege and wealth to explore questions of identity and responsibility in a supportive environment. MMMC programming is dynamic and specific to young people with wealth who are interested in social justice. (New York, November 9-12)

The annual NASCO Institute is always a one-of-a-kind opportunity to network with hundreds of cooperative leaders and employers, to caucus about pressing issues, and to work on building an inclusive and accessible cooperative movement. This year's conference theme focuses on the integral role of cooperatives in building grassroots democracy. In a time when our voices do not feel heard on the national scale, our power lies in our local co-operation. (Michigan, November 10-12)

Transform Finance Institute for Social JusticeIn its first three years, the Institute has brought together over 100 leaders, majority people of color, serving over 5 million individuals collectively. Over three days, participants learn how capital works, explore its relationship with communities, and imagine what it could do instead if grassroots leaders and activists were at the helm. For capital to become a force for good, we need social justice leaders like you to devise ways to engage with it and take it back. From NEC member, Transform Finance. (New York, December 8-10)