In this week’s roundup: a California bill that would decriminalize homemade food sales raises concerns about the "Uberization" of yet another industry; Indonesian co-ops are helping bridge the digital divide; catch up on the incredible New Economy public forum we hosted in Chicago featuring folks from Cooperation Jackson, Open Buffalo, and Solidarity Economy St. Louis.

Plus, be the wind and spread the winds of change towards a New Economy by contributing to our Rise and Thrive Spring campaign!

The Uberization of Food: California is trying to legalize small-scale sale of food made by home cooks- an important path to helping marginalized food businesses. But the bill currently on the table is sponsored by a tech company and opens the door for third-party middlemen to reap profits. Read about the efforts to stop it here.

Mama’s Bail Out Day: For Mother's Day, the Movement for Black Lives mobilized to help black women in dozens of jails across the country by posting their bail. Organizers with Southerners on New Ground, Color of Change and other groups have raised funds for National Mama’s Bail Out Day. Read how they did provided dozens with the ultimate Mother's Day gift here and here.

People's Culture Plan: As New York City's Department of Cultural Affairs works on the official NYC cultural plan, a group of activists has advanced their own vision. The People's Culture Plan tackles issues of gentrification, access, and maintaining cultural ties – suggesting tactics like Community Land Trusts and fractional ownership. Read about it here.

Digital Divide: While Indonesia has a burgeoning digital economy, the growing digital divide leaves a little more than half of Indonesia's population with regular internet access. Smartphones help bridge that gap, but most are produced internationally. The Koperasi Digital Indonesia Mandiri (KDIM) cooperative is trying to bridge this divide by developing a locally-produced, low-end smartphone for Indonesians left out of the boom. Read about how their work is creating access and supporting fellow co-ops here.

Worker's Transition: 1,200 workers of the Bandapani Tea Garden in West Bengal have formed a cooperative society and put in a bid to run the garden themselves. The garden closed after changing ownership a number of times and creating "sub-human" working conditions. Read how they're setting precedents here.

Cars and Housing Co-ops, Unite: Winnipeg's only locally based car-share provider is teaming up with housing developers and the city government to help integrate the sharing economy into new real-estate developments. Their work limits the need for cars and parking spaces and has helped open doors for the Old Grace Housing Co-op. Read about it here. 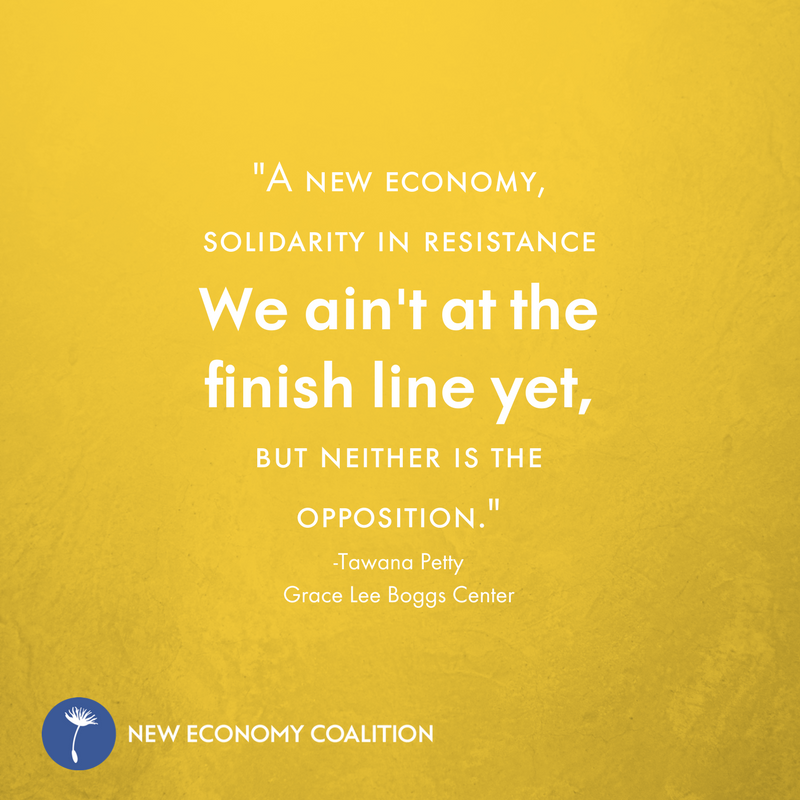 The incredibly talented Tawana Petty of the Grace Lee Boggs Center opened up the public forum we hosted with In These Times last week at our Annual Member Gathering in Chicago. Watch the full discussion: "Solidarity Economy Organizing in a Moment of Resistance."

Together We Rise, Together We Thrive! NEC’s spring fundraising campaign runs through the end of June. Be the wind and spread the seeds of solutions. Please give today!

P.S. If you make a contribution of $25 or more, we’ll send you a poster or tote bag!P.P.S. Can't contribute right now? Do us a favor and retweet this tweet!

In this time of deepening political, economic, and ecological crisis, it’s more important than ever to not only resist the current political threats, but also build a new system—the world we hope to live in. Gar Alperovitz sees our dark times as the potential prehistory of a period of fundamental and transformative systemic change. In the new book, he outlines his vision of the “Pluralist Commonwealth," a new political-economy that moves beyond both corporate capitalism and state socialism. The book is designed as a small, easy to use handbook with short entries on the key elements of a next system, and is packed with concrete and hopeful examples of what can be done locally to build a new truly democratic political economy from the ground up. (Washington, DC, June 1st, 7 PM EST)

It’s no secret that the current socio-economic and political system doesn’t work for the majority of people, but fewer people know that all across the U.S. and the world, people are building solutions and experimenting with new ways to meet their communities’ needs. One of the biggest news stories of our time is simply not being reported. But who’s going to tell that story? The media that has sold generations on competition, consumerism, capitalism, extractivism and war is funded by corporations that profit from all of those. The pluralist, just, trans-local economy we know is possible is going to need new media to spread the word. If we're going to shift the culture we need media that's invested in that shift. Join The Laura Flanders Show, New Economy Coalition, New Economy Project NYC and The Media Consortium to hear about the collaboration they're already involved in, and to brainstorm with them about next steps. View this year's Left Forum program here. (New York City, June 3rd, 10 AM EST)

Building the Solidarity Economy in NYC

The ECWD is a biannual conference which provides practical tools, networking, and strategies for worker-owners, union members, technical assistance providers, community organizers, and scholars. We support an economy that utilizes cooperative and democratic organizational structures to support equitable systems for exchanging goods, services & products and stewardship of the commons for mutual benefit by all. (New York City, June 9 – 11)

PLEA is a global network that has led a worldwide discourse on sustainable architecture and urban design through its conferences since 1982. Over 700 delegates are expected to attend PLEA 2017 in Edinburgh. PLEA Keynote Speakers are world leading figures who will address the key issues of the day on sustainable and resilient built environment (Scotland, July 3 – 11, 2017)

Summer Institute: Building Solidarity In An Age of Division

The Center for Popular Economics' Summer Institute is a residential, week-long intensive training in economics for activists, educators, media makers, and anyone who wants a better understanding of how the economy works. This year’s special track will offer economic tools and analysis to understand neoliberalism; ‘free’ trade agreements; movements of money, people, and goods; economic and military imperialism; and global environmental injustice. We will also explore existing and proposed alternatives for fairer trade and migration systems and equitable solutions to climate change. (Amherst, MA, July 30th – August 5th)