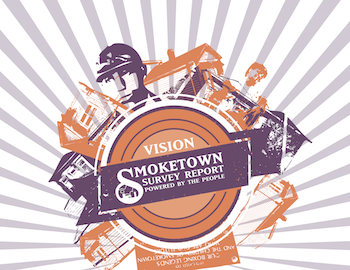 The Vision Smoketown Report is a summary of survey responses from Louisville, KY residents in the Smoketown community about their vision for the future of their rapidly changing neighborhood. The report itself was written by a small team of Kentuckians for the Commonwealth volunteers who poured over responses from the resident surveys. Kertis Creative donated the layout, doing significant design work in-house.

Vision Smoketown is meant to evoke conversations with residents, policy makers, investors, business leaders and others about how changes in Louisville will impact the Smoketown neighborhood in the next 10, 20 or 30 years. More importantly, Vision Smoketown provides an opportunity for existing residents to have a positive influence in shaping the future of their neighborhood.

This report focuses on Smoketown, a historically Black community in Louisville, KY, but may be useful to other communities looking to have greater influence in shaping the future of their neighborhood.