Add Your Voice to the Vision 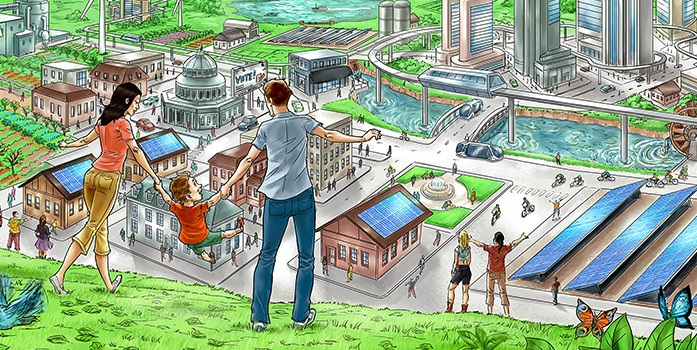 Working to build a new economy from the bottom up will require a lot of experimentation. Having a long-term vision can help make sure such new experiments open the door to even more transformative change in how the economy works.

The Great Transition Initiative was founded twelve years ago by a group of academics and activists in order to think more deeply into how to make such progressive social transformation happen and how that vision of a transformed society should look. The term “Great Transition” comes from the work of the Global Scenarios Group, founded in the 1990s in the wake of the growing discussion around sustainable development. The GSG traced potential pathways into the future—evolution, decline, and progressive change. It offered a foundation for hope by showing that a better world of greater equity, enriched lives, and ecological resilience was possible.

Last year, the Great Transition Initiative (GTI) launched a new website to provide a platform for the exploration of the theory and practice of such a transition. We have been hosting discussions every other month oriented around upcoming GTI publications in the corresponding Great Transition Network (GTN), a wide network of scholars and practitioners from around the world.

New economy thinking plays a large role in these discussions because moving toward a planetary civilization rooted in individual well-being, social solidarity, and ecological stewardship requires re-imagining and redesigning the economy. Already many of our GTI publications have addressed these issues and more:

On May 1, we opened a discussion around a new essay by renowned ecological economist and grandfather of steady-state economic theory Herman Daly, entitled “Economics for a Full World.” Daly argues that the founding assumptions of neoclassical economics no longer hold, as we have moved from an “empty world” of seemingly boundless resources to a “full world” characterized by clear resource constraints. Although qualitative development is still possible and, of course, desirable, the quantitative growth experienced in the past is not. In order to adapt to this new world, economists must begin viewing the economy as a subsystem of the wider ecosphere, rather than vice versa. He presents the vision of a steady-state economy as well as a series of policies that could help us actualize such a vision. Economic debates are often, at their core, ethical debates, and Daly tries to restore that connection between ethics and economics, calling us to think deeply and critically about what the purpose of the economy should truly be.