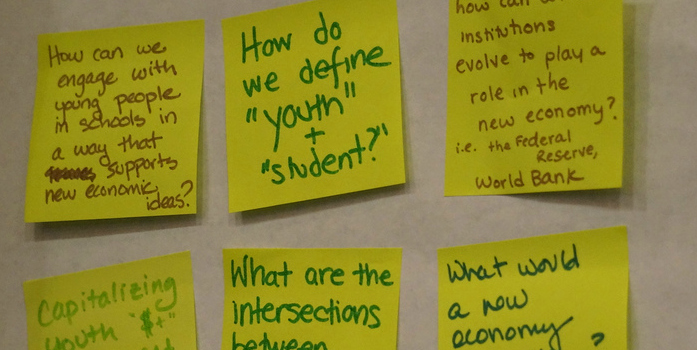 This is a big week for us. Starting today in Philadelphia, NEC will host two meetings to culminate an exciting first half of the year, bringing together dozens of new economy leaders from across the country to usher in the rest of 2015 on stronger grounding than ever.

Today marks our first ever Grantee Gathering. Over the last three years, NEC’s Regranting Program has awarded “micro-grants” of up to $5,000 to 31 separate projects headed up by youth and students. This work is some of the most vital happening, yet, unfortunately, is also more challenging to fund through traditional grants. For the first time, we’ll bring many of our grantees together to hear about one another’s work, and create stronger grounds for collaboration in the future.

On Friday is NEC’s Annual Meeting, a space for coalition members to get to know one another in person, meet members that have joined in the last year, hear updates on each other’s work, and pool the knowledge and experience in the room to plan for the months ahead. The coalition will also elect two members to join NEC’s Board of Directors. We believe that building the new economy requires plenty of movement, as well as a clear, shared vision for the future. That’s why one goal of this annual meeting is to build across regions, sectors, and strategies, imagining a next system that works for the many rather than only a few.

Throughout the week, there will also be chances for participants to explore Philadelphia’s vast solidarity economy, one led in no small part by coalition member the Philadelphia Area Cooperative Alliance (PACA.) Following Thursday’s grantee gathering, we’ll head to worker co-op and PACA member W/N W/N Coffee Bar for a Worker Co-op Film Festival open to the public, featuring a series of short films profiling cooperative enterprises around the US. Once the meetings are wrapped up on Saturday morning, PACA will guide grantees and coalition members through a tour of West Philadelphia, which for decades has been home to food and housing co-ops which have served not only as homes for budding social movements, but as models for other cities.

Stay tuned to our Twitter (@NewEconomics) and Facebook page for pictures, stories and updates over the next several days, and look out for an announcement welcoming on our newly elected board members. We can’t wait to kick the second half of 2015 off with a bang.