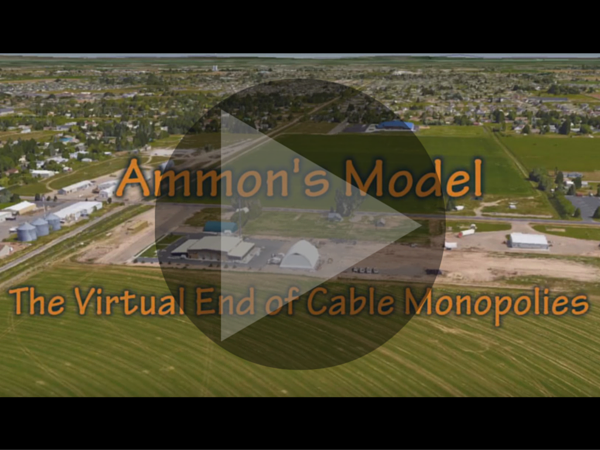 The city of Ammon, Idaho is building the Internet network of the future. Households and businesses can instantly change Internet service providers using a specially-designed innovative portal. This short 20 minute video highlights how the network is saving money, creating competition for broadband services, and creating powerful new public safety applications. We talk with Ammon's Mayor, local residents, private businesses, and the city's technology director to understand why a small conservative city decided to build its own network and then open it to the entire community. We explain how they financed it and even scratch the surface of how software-defined networking brought the future of Internet services to Ammon before any larger metro regions. Ammon's network has already won awards, including a National Institute of Justice Challenge for Best Ultra-High Speed Application, and spurred economic development. But perhaps most important is that most communities can replicate this model and bring these benefits to their communities

For more information, see our in-depth coverage on Ammon: https://muninetworks.org/tags-304

MuniNetworks.org works with communities across the United States to create the policies needed to ensure telecommunications networks serve the community rather than a community serving the network. We publish original news, reports, multimedia, and fact sheets.

Christopher Mitchell, the director of our Community Broadband Networks initiative at the Institute for Local Self-Reliance works on telecommunications issues helping communities ensure the networks upon which they depend are accountable to the community. He has consulted the White House and FCC on publicly owned networks speaks at conferences across the United States on the subject, occasionally to directly debate opponents of public ownership.