Embracing A Long Term Agenda For a New Economy 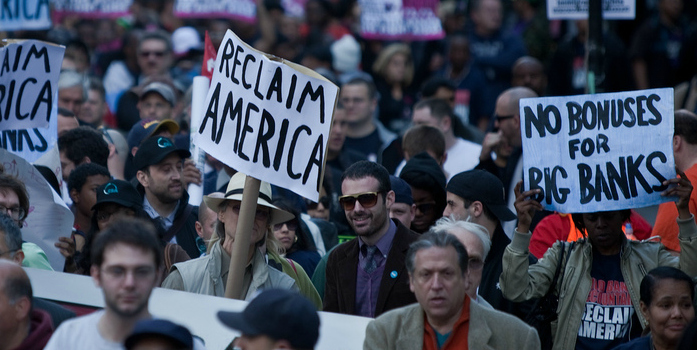 On a crisp autumn day in 2012, I joined a group of pastors and community leaders from the Illinois-Indiana Regional Organizing Network (IIRON) at a church on the south side of Chicago. We talked about the way corporations and the wealthy systematically hoarded political power over the last forty years to make our country work for them—instead of people like us. They built elite think tanks, bought the media, and took over universities. They fought back against the wave of pro-equality reforms that had been achieved in the 1950s and 1960s, and turned the tide in their favor.

That corporate-conservative movement transformed our political and economic landscape over the last 40 years, and the resulting shift has left us with growing economic and racial inequality, a broken democracy, and a planet on the verge of catastrophic climate change.

Government, after all, is the prize, not the problem.

Together, that day we recognized that the solutions our elected leaders had proposed were wholly inadequate to the scale of the crises we faced: We’d seen massive bailouts for banks, while thousands of homeowners in our neighborhoods faced foreclosure and were getting little help staying afloat; We faced a massive jobs crisis without a proposal for the kind of public jobs program we needed.

So, we began thinking about the transformations that could serve as the pillars of an economy that worked for people in our communities, instead of simply padding the pockets of bankers and shareholders.

We did not do this alone. Over a period of several months, hundreds of leaders from around the country participated in a similar visioning process led by National People’s Action, a grassroots network of economic and racial justice organizations. At NPA’s national conference in 2013, we unveiled our Long-Term Agenda to a New Economy, which outlined a 40-year plan to create a more just and sustainable political and economic system.

We recognized that making the fundamental changes we imagined would require reclaiming our government. Government, after all, is the prize, not the problem. It can and should be an equalizing force in our society to tame corporate power, democratize the economy, and revitalize the commons in our communities.

Reclaiming our government is no small task, given that moneyed interests dominate our contemporary politics and control significant portions of both major political parties. That is why I am also part of National People’s Action Campaign, NPA’s sister organization, which engages everyday people in making government work for us.

Together with our allies, we’re building a new left pole in American politics by mobilizing people and money to advance our own political platform and candidates. We’ve begun moving to scale with tactics such as mass volunteer canvasses, leadership training, and individual donor programs.

Ordinary people are volunteering their time and leading the effort to contact hundreds of thousands of voters—especially infrequent voters and voters of color—to make an impact this November. And we’re succeeding in organizing more people and money largely because of volunteer efforts.

The result is some of the most exciting grassroots political organizing in the country. In Kansas, for example, hundreds of African-American and Latino volunteers are contacting 112,000 infrequent voters to defeat radical, right-wing Secretary of State Kris Kobach, Governor Sam Brownback, and Senator Pat Roberts. In Minnesota, volunteers are not just defending progressive champions, but also energizing voters to pursue a bold agenda for economic equity in coming years.

More exciting still is the fact that Kansas People’s Action and Take Action Minnesota, the two organizations leading these efforts, won’t be sending those volunteers home on November 5th.  Instead, they’ll invest in those leaders to advance an issue agenda that prioritizes people and the planet, and train a wave of grassroots leaders running for office in 2016.

Taking these efforts to scale will require increased collaboration between organizations in the movement and even more people willing to spend their Saturdays and evenings talking with voters. By working together, though, we can build the next great progressive movement to take back our government and create the kind of just and sustainable economy in which we want to live and work.