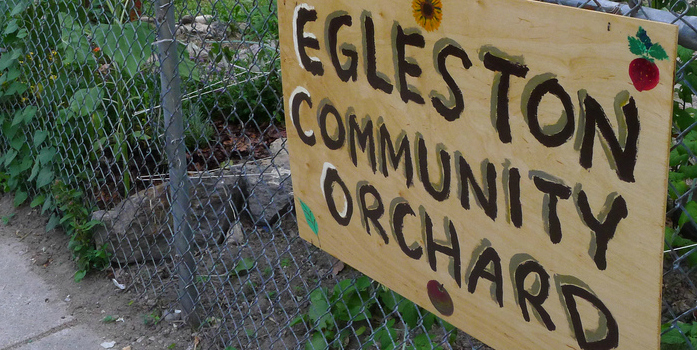 How can we support neighborhoods, cities, towns, and regions as the fertile ground for the kind of economy we need? How do we understand our relationship to the places we live?

Reclaiming our Commons requires coming together as a community. In a neighborhood as diverse as Egleston Square, Boston, this means overcoming barriers of race, class, language, and culture.

The lot at 195 Boylston Street was vacant for over 30 years. Filled with trash and used needles, it was a spot for drinking, drug dealing, and other crime. Today, this lot is full of fruit and vegetables, kids and adults, community gatherings and public art. In a dense neighborhood, its green space offers respite from busy traffic.

Over the past four years, neighbors came together to create the Egleston Community Orchard (ECO), and this year the City’s Department of Neighborhood Development has signed the deed over to the Commonwealth Land Trust on behalf of these neighbors. ECO’s model has inspired other neighborhood groups and prompted conversations with the City to disburse other vacant lots to be community owned and operated, thus expanding our Commons.

ECO is a “stone soup” created by everyone’s donations, love, and labor. Gifted plants are collectively cared for on workdays; Stony Brook Fine Arts created a custom bird bath; students at local elementary schools painted pickets for the fence and bricks for the path; a neighborhood sculptor donated an eight-foot head made from sweet vine. Chairs have been gifted and benches built to sit and catch up on neighborhood gossip. All passersby’s are welcome to take and eat what grows there, and volunteers distribute excess produce door to door in the neighborhood. The Orchard offers a space of calm under a towering oak tree, as well as food and neighborly connection.

In 2010, there was a horrible series of shootings, beginning when a young man was killed on Boylston Street in front of the new Orchard. When Orchard volunteers (mostly English-speaking recent immigrants from Japan, Russia, Indonesia, England, and Germany) saw the family and friends of the young man who had died holding a vigil (mostly first and second generation Spanish-speaking immigrants from the Dominican Republic who had grown up in Egleston Square, but who could no longer could afford to live there), they brought soup and water to those mourning.

Together they hung a white cloth on the Orchard fence with the word PAZ written in bold black letters. Friends used markers and paint to write their messages to the man they had lost. A blueberry bush was planted, and, while taking turns adding soil, people shared words of remembrance. One neighbor had a wooden “peace pole” he had been storing in his basement, with the words “May Peace Prevail on Earth” in English, Spanish, Arabic, and Chinese. He had been waiting to find the right place to put it, and decided to plant it in the Orchard. The initial gesture of offering soup, witnessed by the neighborhood as a coming together across race and class lines, had positive ripple effects – immediately, an inspired neighbor re-launched his dormant Halloween haunted house, and folks re-launched the annual neighborhood parade. Sister Virginia at San Maria de los Angeles leads her annual Peace Tour of the neighborhood from the Orchard.

While the Orchard is one small step on the journey to restore Earth and heal our communities, Egleston neighbors know efforts to reclaim the Commons are mushrooming up everywhere – connected beneath the surface by their shared values as a movement for a New Economy.