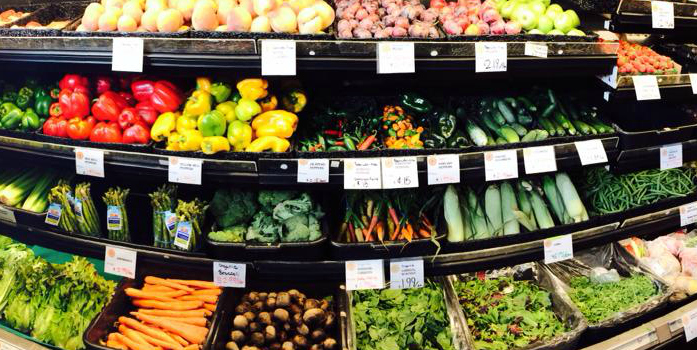 It’s no secret that, despite being the wealthiest nation on Earth and a leader in agricultural exports, many residents of the United States regularly experience hunger and food insecurity. Even so, it’s often shocking to hear that one in seven American households (14.3%) experienced food insecurity in 2013, with another 5.6% of households classified as having “very low food security”, according to the USDA. At the root of American hunger is poverty, which describes the economic circumstances of approximately 16% of Americans. These same households struggling with poverty and hunger are also more likely to suffer from obesity.

In recent years the public has become increasingly aware of the critical role played by food access in determining health outcomes for individuals and communities. In under-resourced communities throughout the US, the grocery industry–now dominated by national corporate chains–has closed or relocated stores in the face of dramatic reductions in the buying power of their customers, unable to keep up with rising food prices and the increased profit demands of executives and shareholders. In their place remain convenience stores saturated with cheap, highly processed foods, food pantries laden with donated nonperishables, or for the fortunate few, long, expensive drives to the closest supermarket (forget public transportation). Check out the USDA’s Food Access Atlas to find out if there’ a “food desert” near you, or if perhaps you live in one. As you can see, food access can be a problem in rural and in urban areas, and is linked to household and neighborhood income, as well as vehicle or public transportation access.

The Scars of Structural Violence

The cooperative movement often frames itself as an effort to regain local and democratic control over key community resources. Food, as a necessity of life, is mostly certainly a “key community resource”, control over which has been depleted by corporate consolidation in the food system, commodity speculation, and again, poverty. Therefore, food cooperatives could and should serve as a holistic solution to food deserts in under-resourced communities, right?

The answer can be yes, but it shouldn’t be considered a foregone conclusion. Whether you are an outsider looking to offer a helping hand to neighbors in a food desert, or a resident of one yourself, it’s important to recognize the profound and lasting effects that resource scarcity, particularly food insecurity, has on individuals and communities. In food deserts, the common cultural values that drive the development of most food co-ops–consuming whole food diets, supporting local and sustainable producers, democratic participation–struggle to develop in an environment where survival depends on maximizing the caloric return for every dollar spent. Federal subsidies for corn, soy, wheat, and sugar have transformed calorically dense, nutritionally-deficient junk food into affordable staples for millions of Americans, while fruits and vegetables remain out of reach. When the budget runs dry, many find themselves in the food pantry line, an experience that represents a loss of control over one’s food: what you receive, when you receive it, and how you receive it is all determined by someone else.

This is not to say that people living in low-income communities or food deserts have no interest or experience with healthy food, or locally/sustainably sourced food for that matter. It is also not to say that there is no interest in the democratic participation required by a co-op. The point is that successful efforts to improve food access require that these structural barriers be understood, respected, and addressed by the community as a whole.

A Food Cooperative That Fits

It’s here that we need to make a distinction between food co-ops that are first and foremost designed to meet a community desire for organic and natural food as their fundamental goal, and food co-ops that are designed expressly to address food desert situations in rural or urban areas. Many food co-ops in the first category are working to find ways to help their offerings be more affordable and/or attractive and/or nearby to low-income people. But that’s different from food co-ops whose fundamental mission is to provide a full service grocery store in a low-income area that has no grocery stores, AKA a food desert. Besides addressing the food desert issue, this approach is trying to anchor the ownership of the co-op in the low-income community that needs the store as a community-owned asset, rather than it being owned primarily by a more amorphous “organic-and-natural” community that is also concerned with low-income people’s food access.

The business models of organic-and-natural stores (which is what the vast majority of U.S. food co-ops are) versus conventional grocery stores are different enough that we have to stay aware of these distinctions. The customer bases, the financing, the price point, the distribution system, etc are all different enough that if we want to use the co-op model to meet the need for grocery stores in food deserts, we have to be thoughtful about which needs we’re trying to address and which models we’re going to implement. Below are some examples of member- and/or worker-owned food cooperatives that are either making significant efforts to serve low-income/food desert residents, or were started with the explicit mission of providing affordable, healthy food to those communities:

Here’s a video from the people of Greensboro explaining why they want a cooperatively owned food cooperative:

Here’s a video explaining the impact of Mandela:

Now this is an example of a full-service grocery stores that is not a cooperative, but is being developed by residents and local organizations to meet community needs:

Beyond Hunger Relief: Re-purposing the Pantry

Let’s take a moment and step outside of the cooperative sphere, and consider what food access resources are already available to low-income and food desert communities. From 1980 to the present day, the number of food banks, pantries, and soup kitchens increased from 200 to 40,000. What was once considered an “emergency” resource has become an institutionalized charitable food system for the poor, gleaning the refuse of the commercial food system and redistributing it to economically excluded individuals.

This secondary food system can seem fundamentally incompatible with the philosophy of cooperative economic development. Democratic control and community ownership are not characteristics that evolve in a system originally designed to respond to crises. But consider the infrastructure required to provide food assistance to 46.5 million people, including the distribution of 800 million pounds of produce nationwide. This could not be achieved without expansive warehouses, trucking fleets, technical expertise, and impressive social capital. Food banks and related organizations around the country are beginning to use these assets to build programs and businesses that provide their clients with affordable access to healthy food on their own terms:

Combating poverty, including its causes and its effects, is of central importance to building a cooperative economy. Those working for a cooperative economy have recognized food as a key leverage point that can affect many other outcomes and systems. At the same time, we must see the effects of those other systems on people’s relationship to food: housing, jobs, education, transportation, land use, and so on are inextricably linked to food. There is much for us to learn and experiment with, and we hope that this brief overview has given you a stepping stone toward deeper understanding and more effective action.

More Information: Other Co-ops and Projects of Interest

If you’re wondering if there is a co-op or buying club operating near you, one good place to look is coopdirectory.org.

And if you are wondering whether all food co-ops are necessarily owned by consumers, take a look at Ask Co-op Cathy: Are all food co-ops consumer owned? (Spoiler alert: nope!)

Meantime, here are some more examples of co-ops and projects from around the country and beyond that are intentionally combating food insecurity and building food sovereignty:

Excited about starting a co-op project? There are many resources available. The place to start is the Food Co-op Initiative, which works nationally to help start-up food co-ops. There may also be regional associations of food co-ops, such as the Neighboring Food Co-op Association in New England. The Sustainable Economies Law Center has a wealth of legal resources for starting a food business or worker cooperative, including legal guides, an online library of resources, policy recommendations to support co-op development, and more. Here in our region, we benefit from a few great financial lenders including the Cooperative Fund of New England, a community development loan fund that facilitates socially responsible investing in cooperatives, community-oriented nonprofits, and worker-owned businesses in New England, and LEAF (Local Enterprise Assistance Fund), a CDFI that lends nationally especially for consumer food and housing co-ops.

We would also like to highlight the cooperative industry’s second tier financial cooperative, NCDF (the Northcountry Cooperative Development Fund), as an important resource. NCDF is owned an governed by 175 cooperative members-owners in 31 states and serves the food cooperative sector (and other co-op sectors) nationally.

Brenda Pfahnl, Senior Loan Officer and Program Manager of Sustainable Foods Systems Financing at NCDF, writes, “as the cooperative sector’s own financial cooperative we are working to make financing available in a prudent way to viable food cooperatives serving any community. Without a financing entity that is owned and governed by the cooperative movement itself, many projects across the country would not have the critical financing access required for projects to work.”