Q & A with NEC’s newest board members: Allison Basile and Ivy Brashear 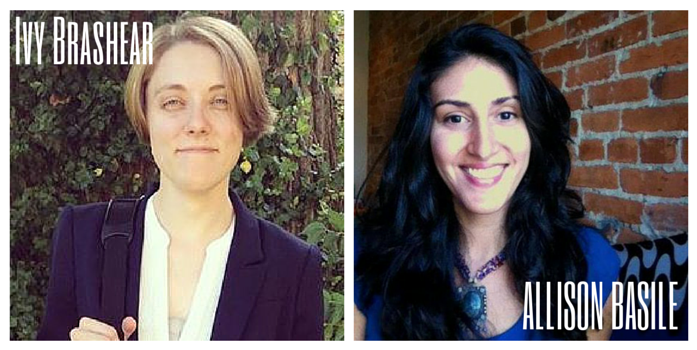 At our annual meeting in May, NEC members elected two new members to our Board of Directors. We’re thrilled to welcome Allison Basile and Ivy Brashear, both working to build a new economy rooted in justice and community. Ivy is the Communications Associate for the Mountain Association for Community Economic Development, or MACED. Allison is a solidarity economy organizer in Washington D.C., working, among other groups, with Organizing Neighborhood Equity (ONE) DC and the DC Worker Cooperation Coalition. By way of introduction, we asked both of them a few questions about their work, how they came to NEC and their hopes for the future.

Tell us a little about yourself.

Allison Basile: I grew up in Columbia, Maryland, in a planned community designed to be racially, religiously, and economically integrated. For the past 6 years, I've been putting down roots 30 miles south in Washington, DC, where we're resisting the destructive status quo and building a solidarity economy in the belly of the capitalist beast.

Ivy Brashear: I am a fifth-generation Perry Countian and at least a 10th generation Appalachian. I was birthed by midwives from the Frontier Nursing Service in Hyden, Ky., and raised in Viper, in far southeastern Kentucky, my whole life. I have been a member of or worked for organizations that focus on the betterment of eastern Kentucky and Central Appalachia since middle school, including Kentuckians for the Commonwealth and Kentucky Riverkeeper. I also worked for Kentucky journalist Al Cross at the Institute for Rural Journalism and Community issues for a year before starting at MACED in the winter of 2013.

How did you first become interested in the new economy sphere?

Allison: My desire to see an equitable world started me down paths like international development, social enterprise, and impact investing. Over time, I saw how rarely this work challenges our underlying systems of exploitation. I became drawn to community organizing, worker cooperatives, land trusts, time banks, and the new economy movement as a whole, because they recognize our need to radically rethink ownership and democracy, while acknowledging the importance of racial justice.

Ivy: My interest in a new economy started early and very hyper-locally. I grew up during a time of industrial recruitment in eastern Kentucky, in the mid-1990s. My dad worked at a wood-products factory that was recruited to the area with the promise of tax breaks. The company paid local workers less than workers elsewhere, regularly discriminated against them because they were Eastern Kentuckians, assuming they were stupid because of where they were from, and refused to promote EKY workers into higher level positions. The biggest reason for all of this mistreatment and degradation was because the company had no investment in the local community, and never intended to stay there. Once the tax breaks dried up, they laid off more than 100 people and skipped town, leaving a huge factory space on a former mountaintop removal site completely empty with no prospects of filling it. Knowing very intimately what happens when a corporation is not invested in a community, I could not help but be shaped by the idea that there had to be another way to support a local economy and community. I began to seek that better way out, which led me to my belief in and support of the new economy we’re all trying to create. The coal industry has had an iron-fisted grip on the region for 150-plus years. In order to save my place and my people, I know that we must transition into a new economy.

Allison: Lots of meetings, emails, and long conversations with people I meet outside. A mix of planning for upcoming events/actions, learning in study circles, and long-term visioning.

Ivy: I work with MACED’s program staff to communicate about MACED and our various programs. More of my time, though, is dedicated to being the team lead for MACED’s Appalachian Transition Communications and Policy work. We developed a Just Transition framework, and try to provide real and tangible new economy examples of what is actually possible in the region so folks understand and can latch onto the idea of a new economy.

Why did you decide to run for the NEC board? What are you most looking forward to in your time on NEC's board?

Allison: NEC is full of creative, brave, and humble people, from the members to the staff. I'm excited to support an organization weaving together the pieces of a just, democratic, sustainable economy, and to learn from everyone involved.

Ivy: I believe in what the NEC is trying to accomplish, and what they already are accomplishing. I also feel like I can provide insight to the board and NEC given my lived experience as a rural person from an oppressed place and people, and my professional experience as an employee of MACED that is intimately involved in our Just Transition strategies. I look forward to developing and cultivating far-ranging relationships with people and organizations both for MACED and for myself, and bringing my experience and connections made through being a board member back to eastern Kentucky for its benefit and betterment.