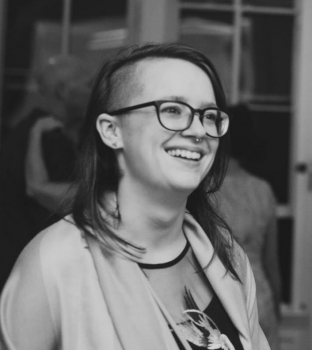 Before we can change any system we must first see and understand it for what it truly is. For Kelly Baker, Interim Co-Director at NEC, that system is philanthropy.

“Fundraising for our work isn’t enough. We need to revolutionize the systems of power that govern charitable giving."

Raised by a single mother in a working and middle class neighborhood of Boston, Kelly never thought she would end up in a career asking people for money. “I didn’t know how nonprofits worked or how they got funded. Let alone that I would be the person responsible for it.”

After college, Kelly moved into a cooperative house, her first introduction to the new economy: “Food Not Bombs cooked meals in our kitchen every Sunday, we threw free shows in our basement. I organized a Really Really Free Market in a local park. I was bartering, doing skillshares, eating food my housemates had dumpster dived.”

“It was around that time that I started asking myself the question — how can I make a living doing something that reflects my values and my politics? If I have to work, I’d like to spend that time making as much of an impact as I can. That led me to nonprofits.”

Two months after starting her first grant writing job in 2014, Kelly read The Revolution Will Not Be Funded. Inspired, she set her sights on getting inside the nonprofit industrial complex and transforming a system that “professionalizes our activism and our rage and forces us to be a little less revolutionary than the world is asking of us all.”

“Working in development is really an eye-opening experience. You see the power dynamics between grantees and funders play out up close. The hoops you have to jump through, the way funding trends cause mission drift. The fundraising ecosystem creates competition, scarcity, individualism – symptoms endemic to capitalism – among community groups that might otherwise be working together.”

“The nonprofit industrial complex professionalizes our activism and our rage and forces us to be a little less revolutionary than the world is asking of us all.”

“Fundraising for our work isn’t enough. We need to revolutionize the systems of power that govern charitable giving, we need to organize at the funder level. We need to deepen our analysis and collaboration as nonprofits so we can build the power to demand change.”

At CommonBound 2018, Kelly organized a gathering that brought together funders and philanthropists to talk about how they might contribute to building the new economy. Organizing the gathering confirmed for Kelly that NEC has a critical role to play in pushing philanthropy to a more radical place.

“Our members are on the leading edge of organizing wealth and capital. Funders are emerging that have an appetite for doing philanthropy differently, but don’t always know how. NEC is creating space for real conversations about the role of philanthropy as we know it – how it is working and not; how it is propping up capitalism, exploitation and extraction; and what its role will be in seeding a new economy.”

A people's economy will be funded by the people. Donate today.

“The amount of money that goes to grassroots fundraising is this tiny, tiny slice of the pie. There is a whole world of privately-held capital that we need to access to make the change we want. We’re just beginning to scratch the surface, and funder organizing is one way of making the pie bigger for our movement.”

This blog post was written by Tori Kuper, Events Manager at NEC, as part of NEC’s #MakingWaves staff series. Support the people who make our work possible by making a gift today!