This week we’re talking about the many ways NEC members help people build community, steward the land they depend on, and cooperate to serve their needs. From black youth in Chicago and artists in Mexico, to cooperative tech start-ups and community land trusts, our members are building power for people to own themselves. (Banner Credit: Molly Costello) 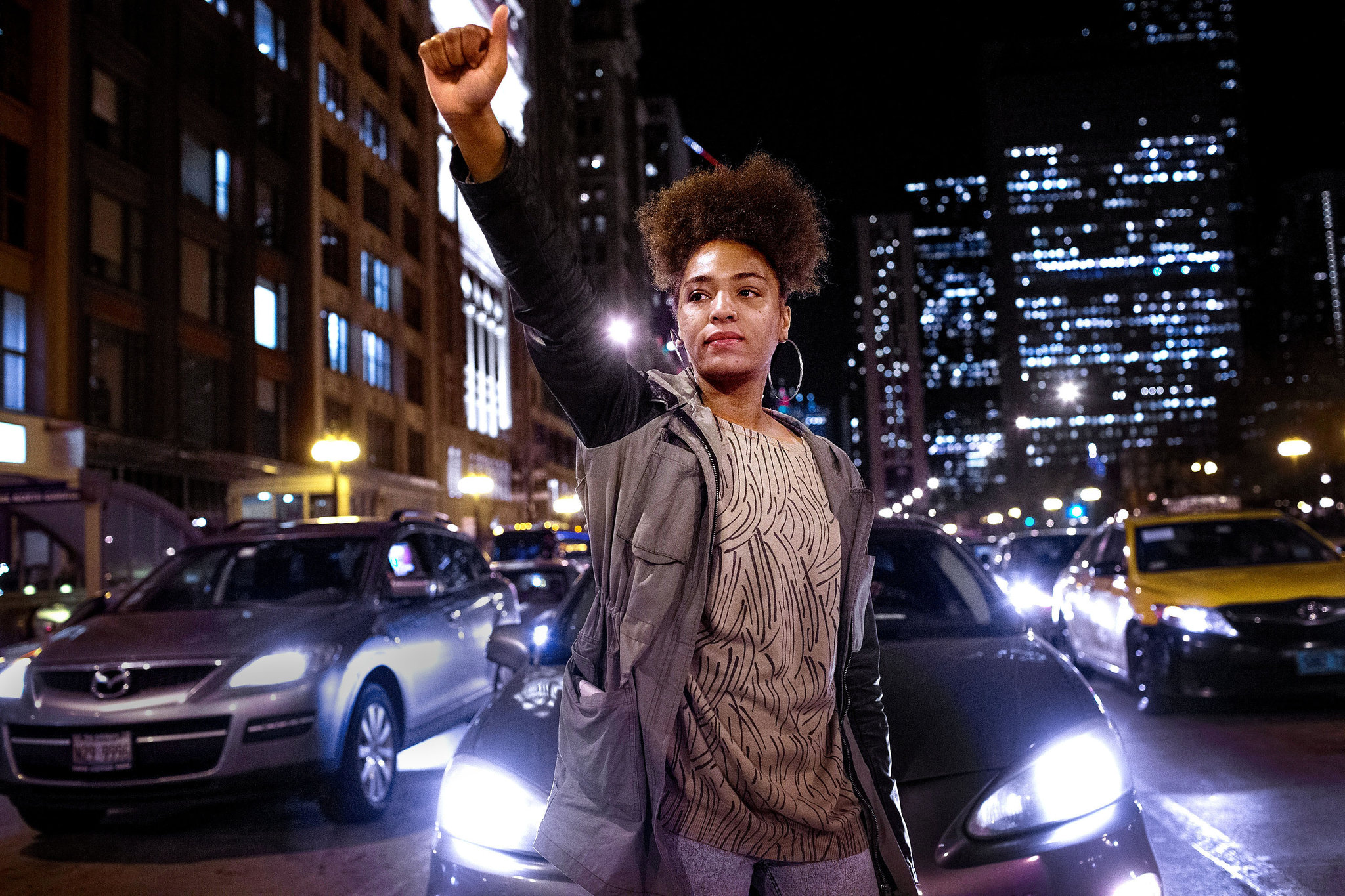 Black Women In Chicago, Getting Things Done: Share power. Work across generations. Blend activism and the academy. These are some of the tips coming out of the women-led organizing in Chicago that brought the election of Lori Lightfoot as the first black, gay, woman mayor and continue the essential work by NEC member organization, Black Youth Project 100. Read more about that potent blend in this NY Times article.

Postal Banking Back on the Agenda: 68 million Americans are unserved by the private banking system, and many people that it does reach become victims of a system often designed to take more from them than it gives. Enter the most favorably seen government agency – the US Postal Service. Basic post office banking services could serve as an accessible, affordable alternative to check-cashing and payday-lending businesses. Read how the 31,000 retail post offices across the country could be used to solve our banking problem. 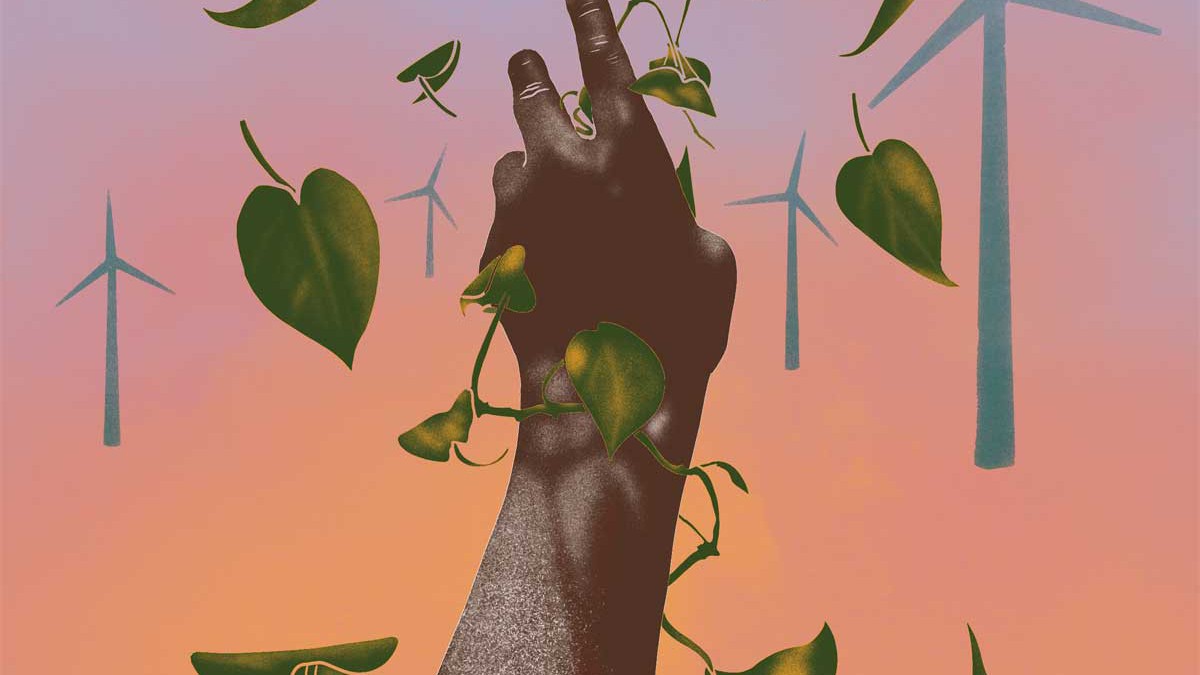 A Collective Business Model for Traditional Crafts in Oaxaca: La Casa de las Artesanias is a cooperative in Oaxaca, Mexico that aims to empower craftspeople and preserve the rich traditions of Mexican folk art. Read how this artisan collective serves more than 50 families by sharing costs. (Fun fact: NEC member organization in Sacramento, Sol Collective, is a partner with the cooperative in selling their goods out of their storefront.)

A British Town’s Solution to Austerity: Inspired by the work of NEC member organization, The Democracy Collaborative, the government of Preston in the UK is prioritizing their public spending on businesses based and run locally and encouraging the creation of worker-owned co-operatives. Read more about Preston’s priority to contract with local and cooperatively owned businesses. You can also watch this excellent report from the Laura Flanders Show about the town. 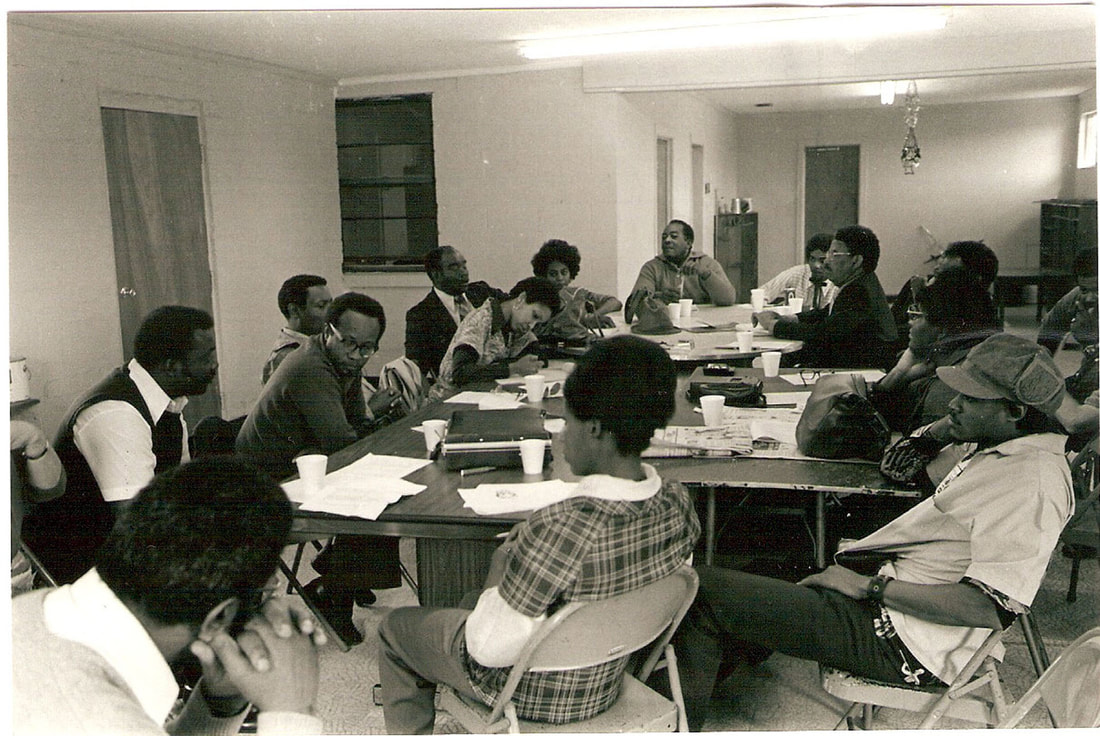 At the turn of the 20th century, formerly enslaved blacks and their heirs owned 15 million acres of land, primarily in the South. By 2000, that number had fallen below 3 million acres. But the struggle for land justice continues, as the nation’s oldest community land trust, New Communities Inc.—formed by civil rights organizers in Albany, Georgia in 1969—rises again. Dr. Shirley Sherrod shares memories of the barriers they faced as communities continue to work to break them down. Read more about the legacy of community land trusts in the United States. 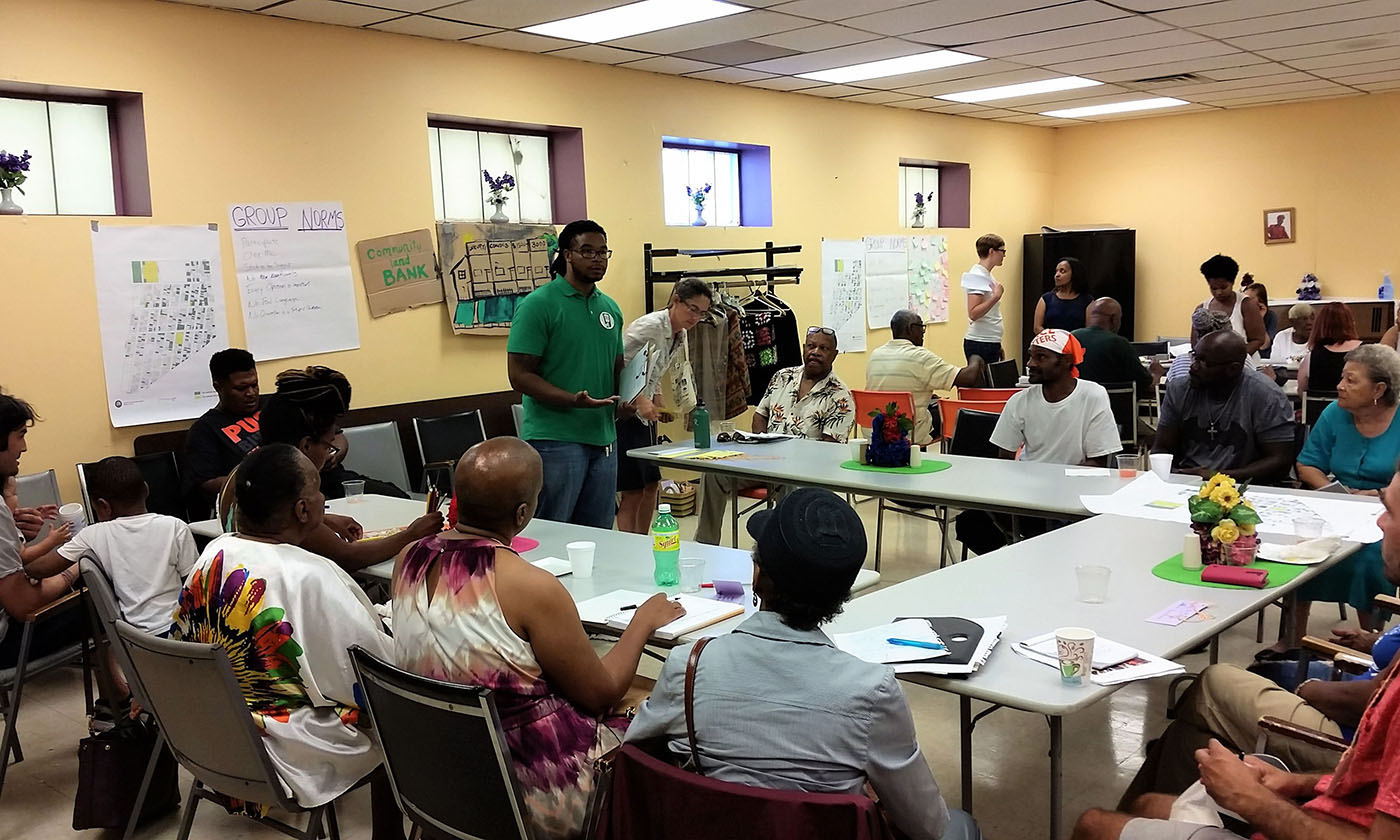 This photo looks pretty similar to the one above it, doesn’t it? In an era of continuing gentrification and real estate speculation, organizing around community-owned land is needed well beyond Georgia. Leading the way for two recent successful efforts are NEC member organizations, Open Buffalo and Cooperative Development Institute. Open Buffalo was recently featured in YES! Magazine for their own Community Land Trust celebrating not its 50th but its 1st anniversary. The photo above is from one of their organizing meetings. Similarly, the Cooperative Development Institute continues to work with residents to convert mobile home parks into resident-owned communities. 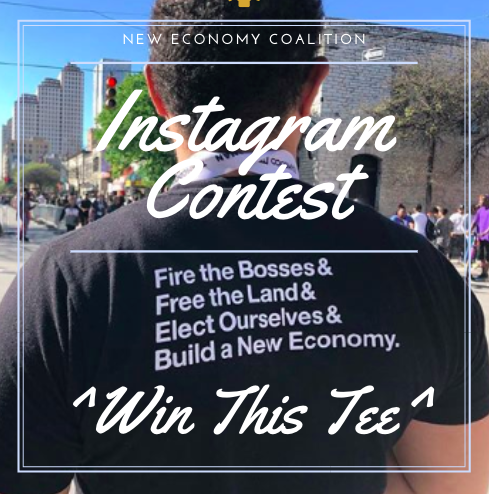 Follow NEC on Instagram – @NewEconomyCoalition – We’re raffling off our “Fire the Bosses, Free the Land, Elect Ourselves and Build a New Economy” shirts (made by worker-owned cooperative, Opportunity Threads) shown above!

Winner will be chosen next Wednesday, May 29th at 12PM

10-Year Anniversary Party for the Participatory Budgeting ProjectFor the past ten years, PBP has been the lead organization growing participatory budgeting across North America. They've launched and supported PB processes in over 30 cities, empowering 400,000 people to decide how to spend $300 million, funding more than 1,630 community-generated projects. To celebrate, they’re hosting a 10th Anniversary Benefit at Prime Produce in New York City. Come toast to the past 10 years, and many more ahead – reflect and share what we hope to accomplish moving forward. (May 23 – New York, NY)

NYC: Move Our Money! – Banking Commission ActionFriday the NYC Banking Commission—made up of the Mayor, Comptroller, and Commissioner of Finance—will meet to determine which banks will be eligible to hold billions of dollars in public deposits for the next two years. Right now, the City primarily banks with Wall Street megabanks like Chase, Bank of America, and Citibank. Join Public Bank NYC to take action at the meeting to call for public money to be used for the public good. (May 24 – New York, NY)

Taking on Wall Street: From Redlining to ResistanceCome learn about financial justice organizing in NYC. This session will focus on community-led efforts to challenge Wall Street’s extraction of wealth from neighborhoods of color and immigrant neighborhoods. Participants will learn about grassroots efforts to organize against structural discrimination in our banking system—from anti-redlining challenges in the 1970s to the bank divestment movement and recently-launched campaign to create a public bank for NYC. (May 28 – New York, NY)

Democratic Principles WorkshopWhat makes an environment a democratic one? What are the elements to consider when trying to increase democratic practices in your co-op or organization? Wilfredo Hernandez, Consulting & Community Director, of CultureWorks will guide participants to explore basic key concepts of democratic practice in relation to their work in cooperative environments and have the opportunity to workshop ideas collaboratively. The workshop will conclude with a panel of co-op leaders sharing both successes and challenges in maintaining democratic workplaces for worker-owners. Organized by Philadelphia Area Cooperative Alliance. (May 30 – Philadelphia, PA)

The New Trusts: Democratic Ownership Beyond the ESOPThe employee stock-ownership plan, or ESOP, is one of the most powerful legal innovations in recent US history. Since its introduction in the mid-1970s, millions of employees have benefited from being co-owners of the companies where they work. But ESOP formation has slowed in recent years, and it has come with shortcomings. In this interactive webinar, we'll hear from some of the leaders of this emerging conversation about the promise and pitfalls of new strategies for democratic ownership. (June 6 – Online Webinar)

ComCap ConferenceComCap19, presented by the National Coalition for Community Capital (NC3), is a multi-day gathering that offers a unique educational and networking opportunity for all those working toward equitable, resilient, and engaged communities. Join community leaders, ecosystem builders, entrepreneurs, investors, citizens, and practitioners from across the country to share community capital models, mechanisms, and best practices to grow their local economies in ways that are participatory and promote shared prosperity. (June 11-13 – Detroit, MI)

Somerville Community Land Trust Kick OffSomerville, MA is experiencing an affordable housing crisis. Many people who have lived in Somerville for a long time, or who would like to, can’t afford to. Real estate speculation and development has left many of our neighbors behind. Together, we can do something about it. Please join us to learn how you can help create community led housing through the creation of the Somerville Community Land Trust. (June 12 – Somerville, MA)

Dismantling White Supremacy UnconferenceThe objective of this event is to provide a space for people of color and white allies–including activists, policy-makers, business leaders, employees, community organizers, or other residents or community members –to have an explicit conversation about dismantling systemic white supremacy (and the many discussions that come up around white supremacy) in a community-led forum. An Unconference empowers the attendees to drive the conversation. There will be no keynote speakers or pre-set “content tracks.” The people who show up for the Unconference are the ones who decide what topics and sessions they want to organize. (June 14-15 – Oakland, CA)

2019 Summer Institute: Economics for EmancipationDesigned to address the movement’s knowledge gaps and counter conservative economic myths, the Center for Popular Economics' Summer Institute in partnership with the Center for Economic Democracy, provides an intensive training in the economics needed to advance a different vision. CPE and CED are committed to popular education, relating political and economic concepts to people’s concrete lives and using games, theater, music, and film to make this information accessible and fun. (June 25 – 29 – Boston, MA)

2019 Socialism Conference In a moment of rising class struggle, resurgent social movements, and the growing popular appeal of socialism, the Socialism 2019 Conference is an important gathering space for today’s left. Featuring dozens of panels, lectures, and workshops on topics like the fight against racism, how to win gender justice, radical working class struggle, current debates on the left, and more, the Socialism Conference brings together hundreds of activists from around the country for four-days of organizing, learning and collaboration. (July 4-7 – Chicago, IL)