Black Lives Matter. We stand with all those rising up to defend Black life across the country. It is critical that we all support bail funds and those on the frontlines of this struggle, as we work to build a new system that affirms the sacredness of Black life. 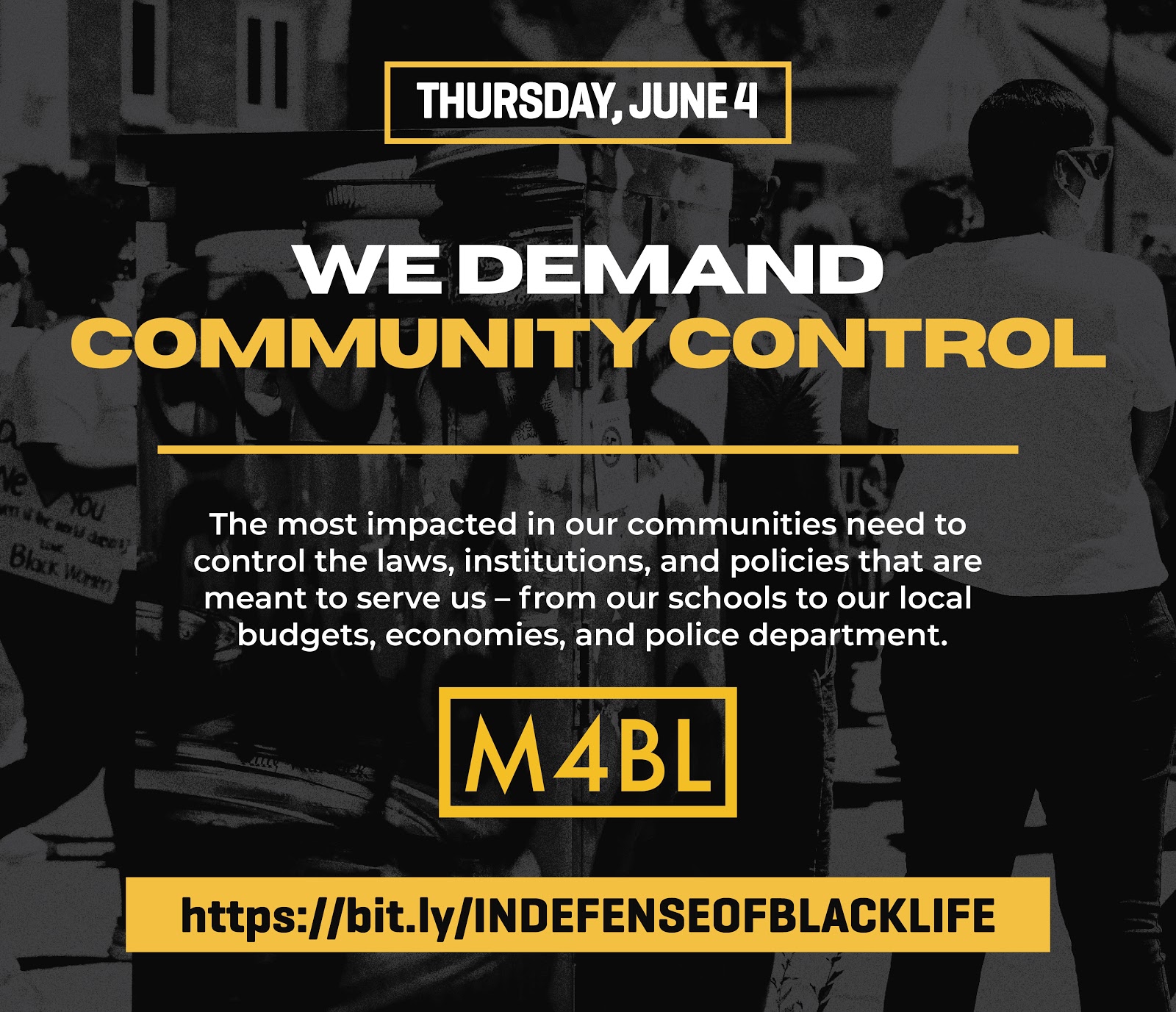 In solidarity with the Movement for Black Lives week of action, we’re doing this Roundup differently. Today is all about Community Control. As M4BL puts it:

We Demand Community Control: “The most impacted in our communities need to control the laws, institutions, and policies that are meant to serve us – from our schools to our local budgets, economies, and police department.”

Black, Brown, and Indigenous communities have always led and grown the solidarity economy — building economies of cooperation, mutual aid, and care to survive and resist the violence of racial capitalism. This is our history. This is our future.

In this Roundup, we want to lift up stories from past and present about how to build the solidarity economy by building community control in specific sectors of society, with a focus on the leadership of Black people and organizations. There are many more demands to make and stories to tell than we have room for in this email. We invite you to share your own examples in these threads on Twitter and Facebook.

PS. If you’re looking for state and local policies that get us closer to community control of the economy, check out NEC’s Pathways to a People’s Economy toolkit!

It is unconscionable that police departments continue to receive up to half of city budgets in some cities, while public education, public health, and the institutions that build strong communities go underfunded. Participatory budgeting (PB) is a tool that deepens democracy by letting the communities who will be impacted by these budget decisions decide for themselves how the money gets distributed. PB is a key tool to build community control and show how money can be shifted from policing to our people.

This year, a coalition led by Black Lives Matter in Los Angeles used participatory budgeting to create a #PeoplesBudget. Ten thousand Angelenos took part in the process and the outcome was clear: defund the police and reinvest in the community. On June 1st, the City voted not to adopt the LA People’s Budget in full. But as of today, organizers are declaring an interim victory as City Council members introduce a motion that $150 million in cuts to LAPD be redistributed to the community. More and more #PeoplesBudget campaigns are popping up around the country — find out if there’s one in your city.

Housing is safety. Housing is healthcare. Housing is a human right. By taking land and housing off of the speculative real estate market — one of the main drivers of gentrification and displacement — and putting it into the hands of the community through cooperative ownership and community land trusts, we can make sure our people have access to affordable housing, permanently.

Our friends at the East Bay Permanent Real Estate Cooperative (EBPREC) are doing just that. EBPREC supports Black, Indigenous and POC communities to cooperatively organize, finance, and purchase property in the East Bay to build wealth and begin to repair the harms done by gentrification. Formed in 2018, they recently bought their first property with the community, and are actively imagining and moving forward new strategies to advance community control in Oakland and beyond.

Now Is the Time to Take Radical Steps Toward Housing Equity
A Group of Mothers, a Vacant Home, and a Win for Fair Housing

This capitalist economy was built on stolen land with stolen bodies. Without reparations for America’s original sin, there can be no justice. As the National Black Food and Justice Alliance puts it: “Our connection to, relationship with and access to land is an essential source of our healing, power and ultimately our liberation. As land based indigenous people, Black communities have a deep connection to the earth with land as a source of spiritual, economic, cultural and communal grounding. We work to build healthy, ecologically sound connections to the land in all its manifestations." As we work to build community control and restore our relationship to land and agriculture, we must follow the leadership of Indigenous and Black communities.

The Sogorea Te Land Trust is an urban Indigenous women-led community organization that facilitates the return of Chochenyo and Karkin Ohlone lands in the San Francisco Bay Area to Indigenous stewardship. The trust stewards numerous plots of land throughout the Bay Area where they grow native plants and gather for ceremony, and is actively working on how to give the land back to Indigenous people.

New Communities Inc, the first community land trust (CLT) in the U.S, was established in 1969 in Georgia to secure land for Black farmers being driven off their land for participation in the civil rights movement. 50 years later, and New Communities’s vision of community control and collective stewardship of land has led to the creation of nearly 300 CLTs across the country today.

The Federation of Southern Cooperatives, established in 1967, is a coalition representing over 10,000 primarily Black farmers, landowners and cooperatives building food sovereignty and cooperative land ownership in the Southern U.S.

Why should essential services like water, internet, and electricity be in the hands of a small number of unaccountable bureaucrats and private companies? There are countless examples of cities and cooperatives providing these services in the interests of people (instead of profit). The truth is that we don’t need corporations like Xfinity and PG&E to meet our community needs, not even a bit.

In North Carolina, a majority Black membership overcame a racist board of directors to take control of the Roanoke Electric Cooperative. Today their workforce is more than 40% African-American, including the first Black CEO of an electric cooperative in America. Roanoke is now running one of the most successful inclusive financing programs in the nation and is in the process of implementing rural broadband and community solar programs.

Organizing for Energy Democracy in the Face of Austerity
Bringing Power to the People: The Unlikely Case for Utility Populism
NEC Rural Electric Cooperative Toolkit
The Future is Public: Towards Democratic Ownership of Public Services

Worker-owned cooperatives – businesses that are owned and operated by their workers — are a critical strategy in building community control and community wealth. Instead of siphoning profits into the hands of executives and investors, worker cooperatives create quality jobs, are democratically run, and build wealth among those who build a business’ value – the workers.

Last month, a group of primarily Black, formerly incarcerated women launched ChiFresh Kitchen, a worker-owned kitchen cooperative. They’re working to create a truly anti-racist, anti-sexist workplace, while building economic independence and resilience on the West side of Chicago. ChiFresh is a beautiful example of how cooperation can build community wealth, and what’s possible beyond the logic of incarceration.

And soaring rents continue to displace Black-owned businesses, worker co-op conversions are a powerful tool to build community control and resist gentrification. In 2018, when the Wild Fig Bookstore was going to close doors due to financial troubles, community members pooled resources to collectively buy the bookstore and convert it into a worker cooperative. By sharing ownership of the Fig, the community was able to hang on to this treasured organizing space and preserve the only Black-owned bookstore in Kentucky. More Resources:

Jessica Gordon Nembhard on the History and Power of African-American Cooperatives
Philanthropic Black Capitalism to Socialism: Cooperativism in Du Bois’s Economic Thought
Resources from the US Federation of Worker Cooperatives

As our friends at the Greenworker Cooperatives in the Bronx said today, “We are in a critical moment where we get to decide what and who we invest in, and cooperatives and a solidarity economy are an integral part to building up a new world. Who and what are you investing in?"

Submit to the Roundup or Leave Feedback »