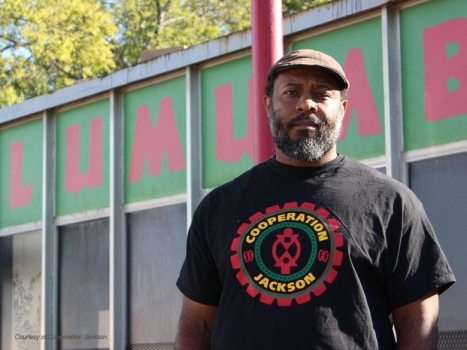 NEC is excited to announce a new partnership with The Media Consortium (TMC) andThe Laura Flanders Show. Together, we are coordinating the New Economies Reporting Project, an effort to support journalists who are interested in covering new economy stories in the US and Canada.

Our New Economies Reporters for Summer/Fall 2017 are:

Deonna Anderson is a budding reporter with an interest in covering criminal justice and other social issues. Her favorite mediums to tell stories are text and audio. She writes for Next City, which is a nonprofit organization with a mission to inspire social, economic and environmental change in cities through journalism and events around the world.

Sarah Aziza is a writer and activist currently based in New York City. Sarah has lived and worked in Saudi Arabia, Algeria, Jordan, South Africa, and the West Bank, in addition to the United States. She will write for Waging Nonviolence, which has published many important articles on the new economy, including a recent story about the Austin taxi drivers who successfully organized to replace Uber and Lyft with a cooperative, as well as a long-form profile on the Cincinnati Union Cooperative Initiative.

Emma is interested in stories that relate to how average citizens are engaging with and solving complex social problems facing their families and communities. As a freelancer, she’s written pieces related to the new economy for VICE, Broadly, Fusion, The New Republic, Salon, Slate, The Marshall Project, 100 Days in Appalachia, The Daily Yonder, The Philadelphia Inquirer and others. These pieces have chronicled a community group seeking to create an alternative police force to get justice for a black trans woman missing for 4 years from Charlottesville, Virginia, a possible solution to the conflict between the high cost of criminal trial transcripts and the under-compensation of court reporters, as well as rural health clinics that raise money themselves to provide services to clients not covered by the ACA, and a community crowd-funded racial justice campaign in a small town in southeastern West Virginia to combat a hate group that had taken up residence there.

Ayşe Gürsöz is an independent producer, photo-journalist, and digital communications strategist who has been working with the Indigenous Environmental Network for the past 5 years. Recently she helped launch Indigenous Rising Media to share indigenous-led stories.

Ajowa Nzinga Ifateyo is a member of the Grassroots Economic Organizing collective and has been a staff writer for the Los Angeles Times, Morning Call and Miami Herald newspapers. Cooperatives are her passion. At In These Times she will be focusing on investment/organizing/cooperatives within low-income black communities.

R.J. Lozada is an award winning documentary filmmaker (Distance Between, Grand Jury Award San Diego Asian Film Festival 2015, Breathin’: The Eddy Zheng Story, Audience Award, CAAM Fest 2016) and multimedia producer who explores and engages multiple diasporas and communities in flux. Making Contact is keen to look at the New Economy intersectionally, including race, class, and power analyses. They seek to make even wonky angles come to life with storytelling accessible to our broad listenership. They are developing a related series of episodes on grassroots community organizing and activism in the South that New Economy stories might fit into.

Suzanne Pajot is a freelance reporter based in Palm Desert, CA. She has more than 15 years of experience in the news business, specializing in feature and investigative reporting. She will report for Public News Service, which is invested in helping spread information in specific states across the country that help foster knowledge, inspiration and community across ideological divides.

Steven Rosenfeld covers national political issues for AlterNet, including America's democracy and voting rights. He is the author of several books on elections and the co-author of Who Controls Our Schools: How Billionaire-Sponsored Privatization Is Destroying Democracy and the Charter School Industry (AlterNet eBook, 2016) . He also spent many years as a reporter in rural America and is interested particularly in New Economies reporting focused on rural America.

Mary Turck is a freelancer who publishes frequently on immigration issues. Cirien Saadeh is a freelancer who publishes frequently on the Somali community. The Uptake, a video news outlet based in Minneapolis, is interested in participating in the New Economy Reporting Project because they are committed to reporting on historically marginalized communities and the justice issues most pertinent to these communities, whether it be the battle for a fair and just wage or affordable housing.

Lewis Wallace Independent journalist, editor and transgender rabble-rouser. with roots in South Carolina. He recently made national news due to being fired from his job in public radio for taking a stance on journalistic “neutrality” and its limitations for marginalized people. He will report for Scalawag, which is interested in telling stories of the South—particularly how low-income people, people of color, disabled and LGBTQ people are shaping politics and culture outside major metropolises.