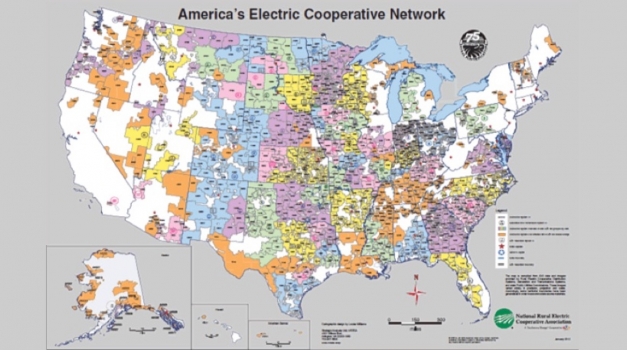 As late as the mid-1930s nine out of ten rural homes in the United States had no access to electricity. The obstacles this created for rural communities in terms of economic development, political participation, and quality of life are hard to overstate.

Then, in 1936, as part of the New Deal, the federal government, facing pressure from organized rural communities, made its largest ever investment in the cooperative economy, creating low-interest financing for consumer-owned rural electric cooperatives through the Rural Electrification Act. These cooperatives spread like wildfire and by the early 1950’s more than 90% of US farms had electric service. Those cooperatives are still with us today, serving a membership of more than 40 million Americans across 47 states and 75% of US territory.

The history of rural electric co-ops is one that our movements should be proud of. However, the transformative history and the democratic structures of these institutions do not guarantee they will play a role as leaders in building the New Economy we need in this current moment of ecological crisis and rampant inequality. After all, democratic structures are only as progressive as the movements organizing to shape them.

Today’s rural electric co-ops serve 90% of the persistent poverty counties in the US and draw the majority of their supply from coal power plants. Due to widespread disenfranchisement and (as a result) limited democratic participation, organizers from NEC members and allies have experienced challenges in winning good governance and accelerated investment in affordable clean energy solutions.

Signs of success within a dozen (out of several hundred) electric cooperatives shows us it is possible to win, and their success inspires us to explore approaches that can pick up the pace, expand the landscape of activity, and build sweeping momentum in the field to fuel powerful campaigns for 100% clean energy led by frontline communities.

At the New Economy Coalition’s 2017 Annual Meeting, representatives from a half-dozen organizations agreed to form a Rural Electric Co-op Working Group to support one another and the broader social movement ecosystem in developing effective strategies to help communities transform their rural electric co-ops into pillars of the New Economy.

Members of the working group include representatives from leading place-based groups like Kentuckians for The Commonwealth, The Mountain Association for Community Economic Development, Kentucky Student Environmental Coalition, One Voice (in Mississippi), and Northern Plains Resource Council (in Montana), as well as national groups like Power Shift Network, Clean Energy Works, We Own It!, and People’s Action.

This month, we were thrilled to hear that the working group has received a $25,000 grant from Solidaire, an individual donor network that was created to resource mass popular movements, as part of their Movement R&D Fund. The R&D fund, which is highly selective, supports “movement leaders to explore, iterate and test new ideas and tactics with flexible funding…[the fund] values experimentation as an investment in cultivating movement wisdom over the long haul.”

Funds from this grant will be used to support the ongoing rural co-op organizing efforts of several grassroots members of the working group, to create publically available strategic toolkits, and to pilot a sophisticated repeatable mapping process that groups can use to lead more strategic and impactful rural co-op campaigns. These maps will allow grassroots group to identify members of their base who are also members of rural electric co-ops and to analyze the economic conditions in areas served by these co-ops, including poverty and percentage of income spent on utility bills.

NEC is thrilled to receive this strong vote of confidence in the power of working together and is excited to embark on this journey with our working group partners!