While tomorrow is, for many of us, a chance to spend time with family, it's also important we recognize the history of Thanksgiving, and honor the struggle for indigenous land and sovereignty still taking place today.

This week, we’re talking about DAPL, what the US can learn from Brexit on building local economies, planning for the next four years of Trump, and what we all can do to support the water protectors at Standing Rock through the holidays. 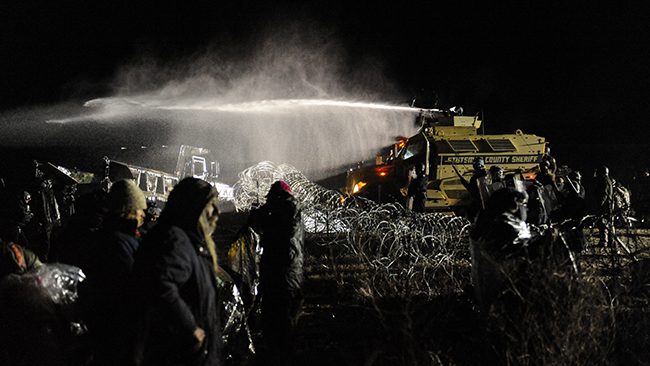 Standing Rock: 167 water protectors were injured at Standing Rock Sunday night when police opened water-canons on a crowd in below-freezing weather. The UN has called the police violence inhumane– so why does the media have a problem with covering it?

Public Banking: Oakland, California voted to use funds from a Goldman Sachs Debarment suit to explore the creation of a public bank. There is currently only one public-owned bank in the US (the Bank of North Dakota). Learn more about them through NEC member, Public Banking Institute.

Beyond Affordable Housing: Angela Glover Blackwell from PolicyLink discusses why we can’t lean on affordable housing as a solution to poverty: “To be equitable, housing must be more than affordable. It must connect people to opportunities that enable them to participate, prosper, and achieve their full potential.”

Art Co-ops: Artist co-operatives are popping up in greater numbers, not only ensuring fairer compensation but creating an environment for collaboration. Read about a few of them here.

Building Local Economies: Trump and Brexit are both examples of how communities on the outskirts of the mainstream economy and politics are demanding to be heard. The New Economics Foundation took a look at one such community in Britain– the coast– and developed an action plan for building local power.

#DivestfromDAPL: As part of the growing #MoveYourMoney and #GrabYourWallet campaigns in support of the protests against the Dakota Access Pipeline, Norway’s largest bank has sold its assets in the project. To learn more about the banks funding the pipeline and what you can do, go here.

COP22: At the latest climate conference in Marrakech, more than 45 countries in environmentally vulnerable places have signed on to switch to entirely renewable energy sources.

“How do we begin to recover from this shock? By experiencing and building and rebuilding and consolidating community. Community is the answer.”

— Advice from Angela Davis in the aftermath of the election.

Carolina Common Enterprise works for an economy in which all people participate and prosper. They help to develop new and expanding cooperatives through cultivating economic opportunities and connecting communities and resources to each other. (Durham, North Carolina)

Jobs With Justice Education Fund believes that all workers should have collective bargaining rights, employment security and a decent standard of living within an economy that works for everyone. We bring together labor, community, student, and faith voices at the national and local levels to win improvements in people’s lives and shape the public discourse on workers’ rights and the economy. (National)

Regenerative Finance is shifting the economy by transferring control of capital to communities most affected by racial, economic, and environmental injustices. (National)

The Cooperative Development Program's mission is to support community residents’ efforts to organize cooperative businesses and establish a platform for achieving economic goals. Celebrate their 10th anniversary in. ( Brooklyn, NYNovember 29, 2016)

Visioning and Creating a Moral Economy
Though it may feel difficult to see through the current political melee, we must continue the work to create a more moral economy now and beyond November. The good news is, the groundswell of moral economic alternatives is growing. Join thought leaders, activists on the ground, and others engaging in strategic planning to realize the vision. (Wallingford, PA December 1-4, 2016)